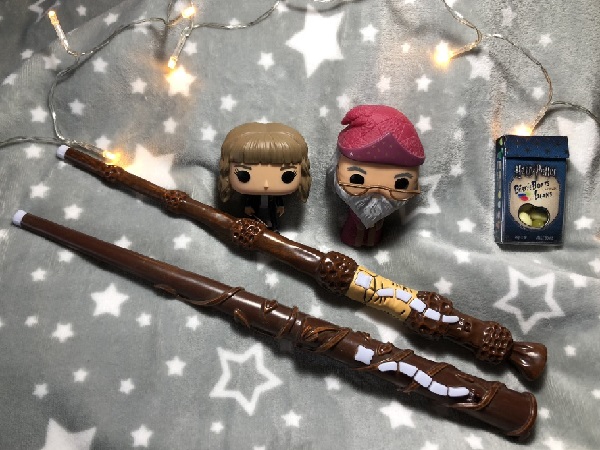 Sponsored Post – I was recently asked if I would like to test the new Harry Potter Wizard Training Wands from Jakks Pacific, in time for the release of the new Fantastic Beast: Crimes of Grindelwald movie, releasing nationwide on Friday 16th October. Have you got your tickets yet?

Being a huge Harry Potter fan I thought about it for like a minute and then said, ‘Of course I would like to test and review them’. I received two wands, Hermione Granger’s and Albus Dumbledores. There are also two other wands available to purchase, Harry Potter’s and Lord Voldemorts. The wands have five different functions and you can either play with them solo, or pair with another and duel against one another.

When the wands arrived I eagerly unwrapped them, then looking out for my kids and making sure they weren’t within listening distance, I opened Hermione’s and started to have a play. I was quickly spellbound. The wands are quite loud and it didn’t take long for my youngest son to make an appearance and want to know what I was doing – Umm, nothing son!

However, noticing the wand and then the second one on the side, he decided it was time to battle – I decided it was time to read the instructions – He agreed after some wand waving and not much happening. Remember magic is a power that needs to be handled with the greatest of care and treated with the utmost respect. So read the instructions carefully before beginning. 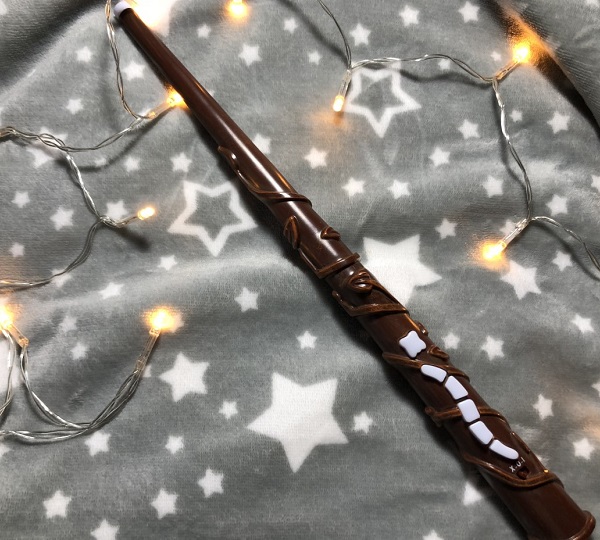 There are five different functions:-

There’s also a cast button, this is what you press to make the spells.

To use the wands the instructions suggest that you stand up, shoulders back and hold the wand out in front of you, this is for all the modes. Also make sure you don’t place your hand over the end of the wands are this is where the sounds come from.

What do the Different Modes do?

“The wand chooses the wizard, remember…I think we must expect great things from you” 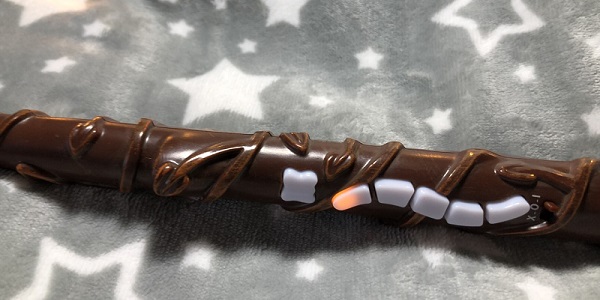 To use this function turn on the wand using the slide button near the end of the wand, once it has finished initialising, only a couple of seconds, you locate the first button on the wand and press it. This will make a dinging noise. The buttons on the wand will light up in a pattern. Using the Training Guide, find which spell corresponds to the light sequence.

Once you have found it, press and hold the cast button and then draw the spell in the air and then let go of the cast button. The wand will make a sound to tell you whether you have correctly drawn the spell or not. If you have it will play the corresponding spell noise, if you haven’t you will hear what I can only describe as a lightning bolt noise and you are to try again.

Each spell has an individual sound. Some are really quite amusing.

“You’re a great wizard, you know”

Once you have mastered the art of making the spells it’s now time to see how well you will get on against another Wizard Training Wand user.

To use this function you need to stand facing another wand user, wands in the air and ready to battle. Once person presses the Spell Practice Mode Button, which is the second button on the wand, and then the other wand user presses theirs. The wands will sync up and a countdown will begin.

The buttons on the wand will light up, like in the Spell Training Mode. You then have to press and hold the cast button and draw the spell that matches the light sequence in the air, then let go of the button. The wands will make a noise to indicate which person was the fastest and the winner. It can also be a tie, to indicate this both wands will play a tune.

You then just repeat the above over and over again until you have had enough. Or in my case until the child gets fed up of losing.

On the Wizard Training Guide at the bottom you will find five spells. These spells are what are used in this game mode.

To play you need to stand facing another wand user, then both of you press the training mode button which is the middle button on the wand. You then begin drawing one of the five training spells in the air. A point is awarded for the correct drawing of the spell and one of the button lights will light up (make a note that no-one wins a point if you both cast the same spell). The aim is to light up all the five buttons and become the winner.

You’ve finished practicing the spells, now it’s time for the fun mode which can be played by two or more players, the more the merrier.

To use this mode, you all press the Wizard Tag Mode button, which is the fourth button. All the five lights on the wand will light up, the aim of the game is to not lose these lights. You each press the cast button. A Tag Spell will shoot out from the wand and hopefully hit one of your opponents. If it does they will lose one of their lights. The same will happen to your wand if you are hit.

If you lose all five lights, don’t worry there’s a secret – Press and hold the cast button and draw counterclockwise circles in the air, watch as you lights come back.

This mode is basically a ‘do what you want mode’. To use this mode press the fifth button on the wand and then either hold the cast button down and draw spells for as long as you want to, or simple press the cast button once and watch as you shoot out tag spells, like in Wizard Tag Mode. 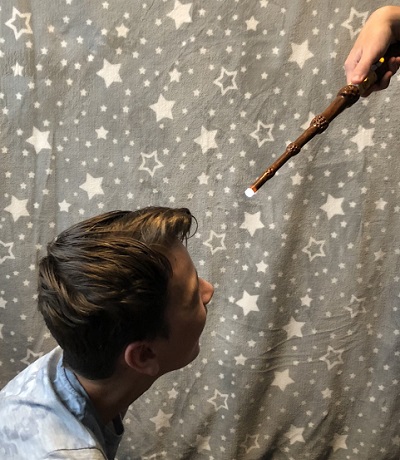 Our overall thoughts are that the wands are well made, lightweight and very responsive. We love how each wand looks different and that you can play on your own or against another wand user. They are a lot of fun and we have enjoyed playing with them immensely. They are prefect for any super Harry Potter fan and there are a lot of us out there. I personally feel that they are well worth the money and would make a wonderful gift. I am really impressed with them.

The wands are available to buy now from all good toy retailers, both in store and online. You can also purchase them from Amazon too. Links are below.

Disclosure: These wands were sent out to us for the purpose of this review. All thoughts, photos and opinions are entirely my own.
Blog posts straight to email via Bloglovin – Like us on Facebook – Follow us on Twitter