Today on the blog we welcome author Kelly Smith, with her guest post ‘Always Be Brave‘, as part of the blog tour for hew new books, ‘Signs In The Rearview Mirror: Leaving a Toxic Relationship Behind’, which was released on 3rd April 2018.

Boston born and raised, Kelly now makes her home in Austin with her three sons and one amazing Giant Schnauzer Bullseye. Kelly has written for Huffington Post, blogs at Thoughts Becoming Words, and hosts a podcast, Lets Get Wicked Deep.

Mid November in New England. When the fall and winter began to collide throwing the sky into an unusual shade of gray and the temperatures struggling to stay above 50 degrees, he and I rush into the local movie theater to see the latest release of the Twilight series. Holding onto one another with a jacket over our heads struggling to shelter us from the rain, we laughed as we made our way inside. After tickets were purchased and we found our seats with our movie snacks, I sat there next to him.

We had our usual sour patch kids and peanut m&m’s. I had my soda to the left and he had his slush to the right of him. As we sat close, touching arms and obviously flirting with each other, the movie previews blared in the background all over the newly remodeled theater. Since we were long distance, when we had the chance to cuddle of kiss we took advantage of it. The prior weeks of facetime and texts were catching up to us and it was a breath of fresh air to be close to him. To smell his cologne and touch his skin was like my birthday and Christmas wrapped into one.

As the lights began to dim, we settled into our seats and into each other. Although there was an arm rest between us, we still managed to get tangled in each others arms and legs. With the lights low and the flash’s on the screen, he held me tighter, closer. Our four eyes glued to the screen as we watched Bella and Edward continued their journey by getting married. Excitement filled my stomach and I felt as if romance was surrounding us. Music filled our ears as he nestled his nose into my neck. As he moved his mouth toward my ear, he whispered he could wait until we got married in my ear. I let out a sigh and fell into him even more.

My body reacted to his touch and his words were now filing my head with images of him with his black hair, brown eyes, and tanned skin waiting for me at the end of aisle. I smiled and kissed him gently on lips. His grip loosened and then he caressed my arm. As we sat close enveloped in what I thought was nothing but pure love, truth, and happiness, I had no idea that in that moment a monster was the one sitting next to me. Under his skin, on his mind, and between his words were lies. Cheating. Abuse. Toxiciticity.

I had no idea that the following years his mask would begin to fall off. In the coming years I would discover while he was telling me he wanted to marry me that day in the movie theater, he was sleeping with his married co worker. I had no idea who he really was. I chose to see only what and who I wanted. When he began to reveal himself by name calling, trust issues, and bouts of verbal abuse, I fought to get that guy who was sitting next to me all those years ago to come back. I was convinced that if I changed and tried hard enough, he would come back. He would see that I was was who he wanted. But that didn’t happen. Instead of getting that man back, that man who never existed, I lost. I lost my family. My friends. My self. I gained a drug and drinking problem. I missed weddings, birthdays, and baby showers. I forgot who I was.

Years after we sat in that theater, I still can’t watch Twilight. It still stings and brings me back to that day. But I have healed and I am on the road to recovery. I have since let him go and find myself. I have learned to see red flags, acknowledge them and pay attention to them. I have learned to love myself. After getting help from both my recovery program and my therapist, I am living a life I can be proud of. 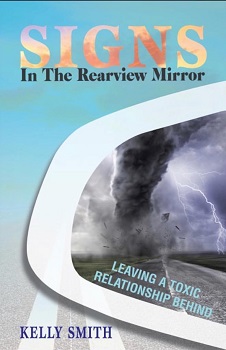 What kind of person ends up in a toxic relationship? And why does she stay? This searingly honest novel answers both those questions head-on.

Coming out of a failing marriage, Kelly turns to Gabe out of fear of being alone. Her gradual slide into danger is at once terrifying and inevitable, and the steps she takes to get out of it will both inspire and offer hope.

You can find out more about Kelly Smith by visiting the website/social media sites below. 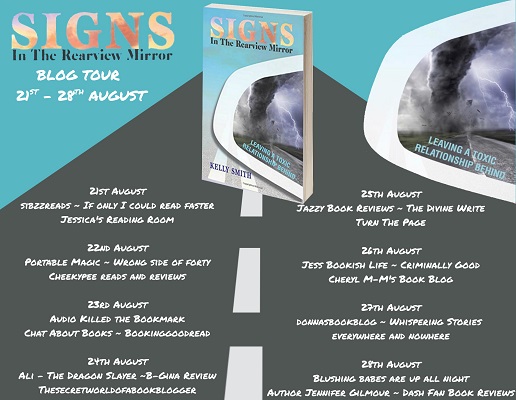