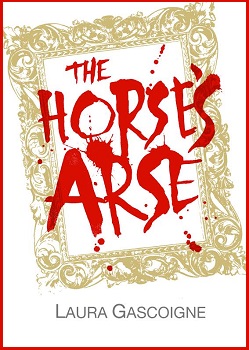 Patrick Phelan is an ageing artist who has never made it big but who somehow manages to live on air in a North London suburb.

When not running art classes for amateurs, Patrick wrestles in the shed at the bottom of his garden with his life’s work: a series of visionary canvases of The Seven Seals.

When his wheeler-dealer son Marty turns up with a commission from a rich client for some copies of paintings by modern masters, Phelan reluctantly agrees; it means money for his ex-wife Moira. However the deal with Marty is, typically, not what it seems.

What follows is a complex chain of events involving fakery, fraud, kidnapping, murder, the Russian Mafia and a cast of dubious art world characters. A contemporary spin on Joyce Cary’s classic satire The Horse’s Mouth, The Horse’s Arse by Laura Gascoigne is a crime thriller-cum-comic-fable that poses the serious question: where does art go from here?

Guest Post – The Horse’s Arse and the Art World Today

Write about the art world today. Sounds simple, doesn’t it, but it’s not. For starters, which art world are we talking about?

One of my motives is writing The Horse’s Arse was to make clear to people who may not have noticed that there are two different art worlds operating today. One is the ‘blue-chip’ art world of alpha galleries representing million-selling celebrity artists, and auction houses selling old and modern masters for tens of millions. The other is the ‘blue-collar’ art world of struggling galleries and artists scuffling to survive at the bottom of the heap. The hero of my book, Pat Phelan, is one of the scufflers who accidentally bumps up against the blue-chip art world, thereby highlighting the gulf between the two and what it means about the status – and future fate – of art.

Next time you read an item about art in the papers, look for the price tag. To the media, that is all that matters. The fact that a Klimt painting sold for £48m at Sotheby’s is much more newsworthy than the painting’s history or the reason the artist had for painting it, and to many people involved in the blue-chip art world more interesting than the painting itself. Collectors have always bought art to enhance their social status, but in the past it was less about the money. The founders of the great American collections were not connoisseurs – most of them were too busy making money – but they wanted to learn. They were motivated by the desire to surround themselves with beautiful things. Rich collectors today are a different breed. A few collect in order to found museums, but for most it is a competitive sport. The more they spend on a work, the higher their status among their Ultra High Net Worth Individual friends. The quality of the work doesn’t matter, but the brand name does. A Picasso or a Warhol ticks the right box, never mind if it’s a late Picasso when he was past his best or a Warhol screenprint knocked out by a self-confessed ‘Factory’.

On the side of the art world served by the smaller galleries, the situation is completely different. Here knowledgeable small-scale collectors can still be found who buy art because they like it. Unlike their UHNWI equivalents, they don’t invest in art, they simply acquire it without expecting it to pay dividends in the future. Equally, the artists who make it are not expecting to have profitable careers and become celebrities. For them art is a vocation – it’s what they do. In fact to be able to afford to do it, many of them need have day jobs or night jobs. A recent poll found that £10,000pa was the average earned by UK artists from their art.

You’d think these two art worlds could coexist quite happily, but it’s not that simple. When the worth of art is measured primarily in money, it devalues works that sell for smaller sums. There’s a perception that the art that is sold in smaller galleries is second-rate and that those who buy it are throwing money away on investments that will never pay off. If it costs peanuts, the reasoning goes, it’s the work of monkeys. For artists represented by smaller galleries, it’s almost impossible to make the leap into the blue-chip stratosphere. The top end of the art market is a closed shop.

Of course we’re reckoning here without the verdict of history, but the verdict of history takes its time when the whole art market is rigged to slow it to a crawl. Once the price of a blue-chip artist has been hyped into the stratosphere by their alpha dealer, it simply cannot be allowed to drop. If it does, the bottom falls out of that artist’s market, with a knock-on effect on the market as a whole. Dealers and auctioneers have devised clever ways to insure against this happening. And so, like the gulf between the 1% and the rest of us, the divide between the two art worlds just keeps getting bigger.

Things get interesting when fakes are introduced into the equation. A forged Warhol screenprint may be physically indistinguishable from one printed by Warhol’s Factory and if the fraud is successful could change hands for $100m dollars. Once the fraud is exposed, though, its price will go down like a lead balloon (and the fraudster, if caught, will go to gaol).

What’s the difference between the original print – itself a copy – and the fake, when the image is identical? The truth is that what the UHNWI investor is buying is not the image, but the price tag. That’s the paradox of today’s art world, and the tragicomedy at the heart of The Horse’s Arse.

Laura was born in Cairo in 1950, the daughter of a bookseller and an Italian teacher, and grew up in Brussels and Cambridge before studying Classics at Oxford University. Her sister is the writer Marina Warner. Surrounded as a child by the paintings her father collected, she has always had a passion for art and when not writing about it, she paints. 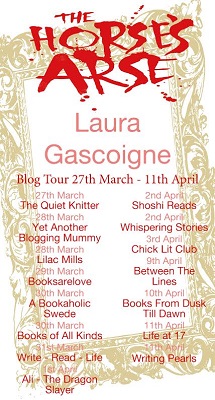