Poison in the Heart by ST Englert – Book Review

Poison in the Heart by ST Englert – Book Review 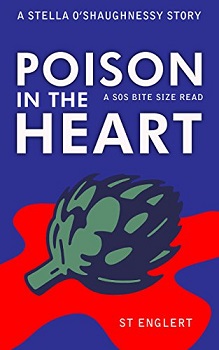 Stella O’Shaughnessy is a whip-smart but unambitious young woman with a penchant for Pinot Gris, thick cut potato chips, and taking life easy at her job as a personal assistant at Wren Shipping Consultancy. With no intent of breaking the glass ceiling anytime soon, Stella’s primary day-to-day concern is what will be on television tonight and what delicious food her best friend Gary will serve for dinner.

Stella’s routine life is disrupted when her sweet job turns out to be more than she bargained for. An innocent administrative error reveals that her simple secretarial tasks are a front for the delivery of covert goods and information for a secret trade agency called GRANADA. By mixing up a delivery, she has placed vials of deadly biological weapons in the hands of a defector agent intent on selling the poison to the highest bidder.

How will Stella adjust to this new reality?
Will she be able to stop the vials trading hands before it’s too late?

Stella O’Shaughnessy works as a receptionist/PA for Wren Shipping Consultancy. Every afternoon at precisely 4.30pm her boss, Johnathan Pilgrim, rings her with the next day’s work. He’s always been punctual, but today no phone call has arrived.

Not long before six o’clock Johnathan’s wife and son, Roger, arrive at the office demanding to know where he is. It’s Roger’s birthday and his dad is needed at his birthday party. Stella tells his wife that he is out of the country, but did send Roger a present. On opening the box, instead of a present inside are four artichokes.

Just as Stella takes two artichokes out of the box to look at them, a man immediately arrives with another box containing a toy car, telling Stella that there must have been a mix up. He hands Roger the car, grabs the two artichokes from Stella and runs off, leaving Stella flabbergasted and determined to get them back.

Stella should have left well alone though. Instead, she ends up getting herself into weird, and dangerous circumstances involving biological weapons. Who’d have thought artichoke could be so deadly?

At only 51 pages, and six chapters long, the start to the ‘Stella O’Shaughnessy’ series ‘Poison in the Heart’, is a quick and exciting read. It is fast-paced from beginning to end, and for a short book, contains lots of mysterious and thrilling moments.

The story is a strange one, well artichokes do play a major role in the plot. I did gather what was happening from the moment the man took the vegetables, but how the plot would pan out, I couldn’t second guess.

The book is interesting, and unforgettable, which is a good thing, seeing as you’ll have to wait until book two is released before you can carry on the story. But with fabulous characters, who are very likeable, and a decent storyline, you won’t mind the wait.

I can see Poison in the Heart attracting a lot of attention. It will only take you about 45 minutes to read, but it will be a gripping 45 minutes. Definitely one to put on you TBR list.