The Importance of Being Me by Caroline Grace-Cassidy – Book Review

The Importance of Being Me by Caroline Grace-Cassidy – Book Review 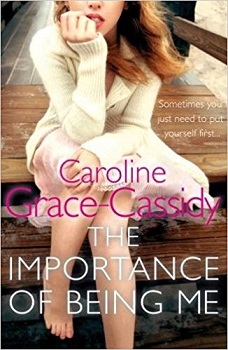 When was the last time you put yourself first?

Thirty-eight-year-old divorcee Courtney Downey has no idea who she is any more. She has devoted her life to bringing up her beloved 15-year-old daughter Susan, but Courtney just doesn’t get the celebrity-obsessed, Snapchat-filtered teenage world Susan is part of, and they re growing apart.

When Susan announces she wants to live with her dad and his new, younger girlfriend, Courtney is devastated. But could the end of one life be the beginning of another?

When Courtney is offered a job in beautiful, sun-kissed Cornwall, she and her vivacious best friend Claire follow their hearts and leave their problems behind for a summer of sand, sea and second chances. And when she meets sexy but infuriating builder Tony, Courtney rediscovers her passions for life, for cooking and for love.

But just as Courtney is finally looking to the future, a crisis with Susan pulls her back to Dublin, and back into old habits. Will she ever be able to let go of the past and embrace the importance of being herself?

Courtney lives in Ireland and is a single mum to fifteen year old stroppy teenager Susan. Her still husband David lives not too far away with his girlfriend, the richer, younger, beautician Mar-nee.

Claire is Courtney’s best friend, married to Martin. They have known each other for many years, and were bridesmaids at each others wedding.

When Courtney is offered her dream job in St. Ives, Cornwall, she would love to jump at the chance, but Susan doesn’t want to go, and her beloved Granny is at death’s door, she can’t leave them.

But all that changes when Susan decides she doesn’t want to live with her mum anymore, and a huge problem comes crashing into Claire’s life. The two of them decide it’s time for them to have some fun, so the best friends take off to enjoy what the seaside town has to offer.

The Importance of Being Me, is quite an emotional, heartfelt story. It is split into three parts, the first was getting to know the characters, and their back stories. Although I did enjoy this section, it felt slower than the other two.

Susan is only 38, but she comes across as much older, especially with her saying ‘love’ or ‘pet’ at the end of her sentences. Although her daughter is a disrespectful young lady, sometimes Courtney did treat her like a little child – The bra incident is one example. Flat chested or not, what mum wouldn’t want their fifteen year old daughter to wear a bra?

Moving on to Susan, my god that girl needed a good talking to (or in my day, a clip round the ear!), and shown who is boss. As a mother of three boys, 20, 14, 11, I would love to see any of my lads treat me the way Susan does her mum. She isn’t helped by Mar-nee, who really got on my nerves, that woman certainly thought she was something special.

This book will have you realising that it is okay to be ‘you’, and that actually just being ‘you’ sometimes is vitally important to your well-being.

Ms. Grace-Cassidy writes with a genuine, authentic voice. I was very impressed by how she weaved all of the plot lines together flawlessly, and how she gives you everything you need to be able to get the perfect visual image of the story.

The Importance of Being Me is a wonderful, thought-provoking family saga. A story that will inspire you, as it keeps you hooked to the pages. A book that challenges you to look at your own life, and to make you remember that, ‘you are important’.

Caroline Grace Cassidy is an Irish film and television actress, and author. She is best known for her role in David Gordon Green’s Your Highness.

Her debut novel When Love Takes Over was released by Poolbeg on February 7, 2012. She was cited by The Irish Times newspaper as one of their ‘People to Watch’ in 2012.

Since then she has been published with , The Other Side Of Wonderful (2013), I Always Knew (2014) Already Taken (2015) and The Week I Ruined My Life was published in 2016 with UK Publishers Black & White Publishing. 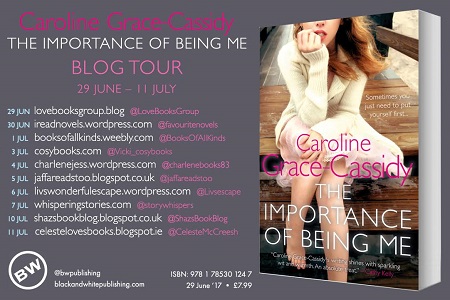