Jack Dawkins, AKA as the Artful Dodger by Terry Ward – Guest Post

Jack Dawkins, AKA as the Artful Dodger by Terry Ward – Guest Post

Today on the blog we welcome author Terry Ward, who is promoting his new book ‘Jack Dawkins‘ the sequel to Charles Dickens’s Oliver Twist, which was released on 20th May 2018. 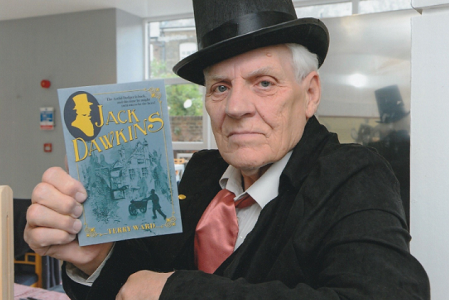 Terry Ward, author of Jack Dawkins – being the further adventures of the Artful Dodger, is a prolific poet and storyteller. He took early retirement from his position as head of a university’s hospitality services to achieve his long-held ambition of becoming a published author; succeeding when The Conrad Press took on his brilliant sequel to Oliver Twist.

Terry’s adventurous early life is related in his self-published autobiography, As Far as I Can Remember’. Having served with the elite Trucial Oman Scouts and subsequently become chairman of their association, he has also put together a unique collection of rare photographs and reminiscences, published as Are You the Man?

Terry is currently re-structuring his historical drama, The Levelling Dust, now called, Between Cancer and Capricorn. It is set in the 1950’s and was inspired by poet James Shirley’s premise that there is no armour against fate. Terry agrees wholeheartedly with that!

Terry is married, with two sons and three grandchildren.

Jack Dawkins, AKA as the Artful Dodger

Jack Dawkins, AKA as the Artful Dodger, wants to set the record straight about what happened to him after he was obliged to take up lodgings in Newgate Prison. Thanks to the genius of Lionel Bart, we all have a lasting image of him skipping away into the sunset, arm in arm with Fagin. Well, the young jackanapes is here to tell you that the truth is very different.

You don’t have to know your way round archaic words, history or the works of Mr Dickens, because Jack has very kindly provided a Glossary that you can refer to as he relates in his own inimitable fashion, his encounters with an unusually erudite Bow Street Runner, murderous villains, turnkeys, philanthropists, Innkeepers, Owlers, passing strangers-and Miss Lysette Godden, the first human being he has ever loved.

Strangely enough, Jack also reveals that, as he conducts what proves to be a highly dangerous search for his mother and father, he finds his true self.

I thought you might like to take a look at Jack Dawkins’ ghost-writer.  You can see more of both of us on the You Tube video ‘The Spirit of the Artful Dodger’. In which Jack does the decent thing by returning from ‘Mutton Pie and Porter heaven’ to give me a helping hand.

After Oliver Twist intervenes to save Jack Dawkins – the legendary Artful Dodger – from transportation to Botany Bay, Jack embarks on what proves to be a perilous quest to discover his roots. Before he can say Fagin! He is battling to survive a devastating flood and rescue beautiful black-haired, green-eyed Lysette Godden, the girl of his dreams, from the hands of murderous villains.

Jack and Lysette, searching for Jack’s parents, head to France and have an adventure there which tests their mettle and mutual love to the utmost and changes their lives for ever. Brilliantly and evocatively written, Jack Dawkins is a worthy sequel to Charles Dickens’s immortal masterpiece Oliver Twist.