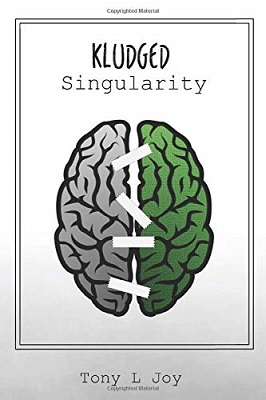 Alan is wasting his time in technical support, dreaming of the future. Accidentally releasing an advanced computer worm wasn’t how he imagined it would start. Now he’s just trying to hold everything together with digital duct tape and wishful thinking.

His employer’s sinister secrets throw a wrench in those plans as he learns the technological singularity is imminent. When “working to live” takes on a literal meaning Alan realizes the future may not be as bright as he’d hoped.

Alan fights to guide the future of humanity before control, and freedom, slip from his fingers forever.

Wikipedia estimates that over 2 million books are published every year and Google has calculated that there have been around 130 million books published throughout history. With so many works it is understandable that some book titles get repeated so congratulations to Tony L Joy for a memorable title with a relevance that will become clear as you read the book.

I feel that the synopsis for Kludged Singularity seriously undersells the theme of this book although I am aware of the dangers of giving away the plot. Behind the humour, the setting and the characters, the author has given us some serious theories to consider regarding Artificial Intelligence.

It starts gently enough with two young men, Alan and Surendra, being given surprise interviews for more senior roles within their multi-national organisation. Their stories are told by Joy in alternate chapters with plenty of intrigue to keep the reader’s attention.

Both of the main characters are on the geek spectrum, stereotypical of IT specialists but they are balanced by the others who have a variety of backgrounds and motivations. My favourites were Dr Ziegler and Anila. The setting is interesting, being a beautiful island owned by their organisation with good accommodation and leisure facilities.

My copy of Kludged Singularity would have benefited from a good proofreading and correction. Hopefully it was a pre-publication edition and that the finished article is much cleaner.

At times Alan’s storyline was heavy on IT detail which stretched my understanding but as the situation gradually revealed itself I found myself fascinated, and a little scared, by the possibilities that AI could bring. It also made me think more seriously about my interactions on social media, particularly with those contacts that I have never met in real life. Kludged Singularity is a great thought provoking read and I have awarded four and a half stars.