The Story of a Snail by Luis Sepúlveda – Book Review

The Story of a Snail by Luis Sepúlveda – Book Review 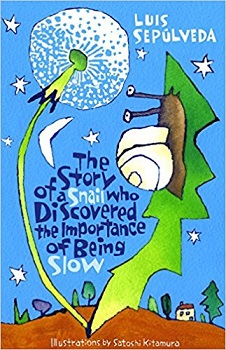 Rebelde the snail can’t stop asking his fellow molluscs’ awkward questions, starting with: why are we so slow? When he is finally banished from the snail community because of this, he is forced to travel the world alone.

As he explores in his slow snail-like way, Rebelde makes new friends and goes on plenty of adventures, gaining wisdom from every new encounter. But when he finds out his friends are in danger, he decides to rush home to warn them.

Will he get there in time to save them?

The Story of a Snail who Discovered the Importance of Being Slow, was written by the author for his grandchildren, after one of them asked him why snails moved so slowly.

Rebelde the snail, wanted to know why he, and all the other snails could only go slow, so he went looking for answers.

He visited the wise, old owl who told him it was because he carried the large, heavy shell on his back, but Rebelde wasn’t convinced, so he decided to keep on searching for the answer.

The other snails got fed up of him constantly questioning his slowness. When he left them in search of the truth they were truly very happy. That was until they found themselves in trouble.

The Story of a Snail is an excellent, older children’s book by renowned author, Luis Sepúlveda. The book is exceptionally well-written, and the plot is intriguing. Who would have thought that a story about a snail could be interesting? But it most certainly is!

Not only does Mr. Sepúlveda have a wondrous imagination, but his books are always filled with life lessons too. They may not always be at the forefront, but they are subtly there, soaking into children’s minds.

My only fault with the book is that I would have liked to have seen more illustrations. There are a few small black and white one’s here and there, but some lovely full/half page pictures would add to the enjoyment. It is still a lovely book though, and one I’m sure kids will enjoy reading.

Chilean writer, film director, journalist and political activist whose success has been perceived more abroad than in his homeland. Following the publication of the novel The Old Man Who Read Love Stories (1992), became one of the most widely read Latin American writers worldwide.

From a young age he made numerous trips from Punta Arenas to Oslo and Barcelona to Quito. He also visited the Amazon and the Sahara desert. Politically engaged, he was imprisoned during the dictatorship of Pinochet and later left the country. Exile took him to Europe, where it has been published most of his novels and stories, showing no special desire to return to his country, which earned mixed reviews for a while. Like Isabel Allende, his literary work has not been valued in line with its sales success.