The Writing Life of: Laura Briggs

This week on ‘The Writing Life of:‘ I am thrilled to be interviewing author Laura Briggs. Laura will be sharing with us detail of her writing life, telling us all about her latest book ‘A Wedding in Cornwall‘, which was released on 11th August 2016 and answering a few fun questions too.

So without further ado, let me introduce you to Laura.

Not really. I liked drawing and writing stories as a child, but I didn’t really enjoy reading that much until I was in my teens. It wasn’t until after college graduation that I really began to seriously consider writing as a possible career.

It just sort of happened. I was helping another writer polish their manuscript to send off to potential publishers, and I wondered if I could try doing the same thing. So I penned a short romance about a bookstore owner who accidentally requests the wrong author for her next book signing event—and, of course, romantic complications ensue for them!

I sent it off to Pelican Book Group, not really expecting anything to come of it. I was floored when they sent me a contract just a few weeks later. Since then, I’ve published five more titles with them and have also published some books independently through Amazon and Smashwords.

I think it’s safe to say that Jane Austen’s works have inspired a lot of ideas for me. I think most romance writers could learn something from reading those classic love stories!

I’m lucky enough to have writing as my full-time job, so my working day is typically spent with a laptop. Which is kind of uncomfortable, actually, so I try to break up my time throughout the day with other tasks and some social time. A chapter a day is my goal, but I don’t always make it there.

Not exactly. I try to picture the scene I’m about to write as if it were part of a movie playing in my head. That doesn’t always work out, so sometimes I just sort of plunge in and type no matter what—anything to get words on paper and start forming the story.

I also like to write the scenes for a book out of order. Sometimes, I’ll even start by writing the last scene first and working my backwards through the story.

6) Do you write using Longhand, Typewriter or Computer?

Computer, mostly, though I make a lot of my notes and outlines on paper initially. I love the idea of an old-fashioned typewriter, though—even if it’s not very convenient in reality. Anytime one of my characters is a novelist, I tend to describe them as owning a vintage model typewriter, so I can live through them vicariously.

7) Do you have a favourite character(s) from any of your books?

Strangely enough, I love a lot of the side characters and bit players. They can really make the story shine, especially when it comes to adding some humor. Since I write mostly romantic comedies, that’s an important element for me. For instance, in my road trip romance Late to the Wedding, it was all the colorful characters my heroine and hero encounter on their crazy journey that made the book so much fun to write (and hopefully) to read.

8) Do you plot your books completely before hand or do you let your imagination flow whilst in the writing process?

It depends on the book. Some of them have really detailed, scene-by-scene kind of outlines. Others just have a few lines describing the major plot points. I don’t like for a book’s outline to be so set in stone that I can’t change something if it’s not working, so I try to keep it pretty flexible. 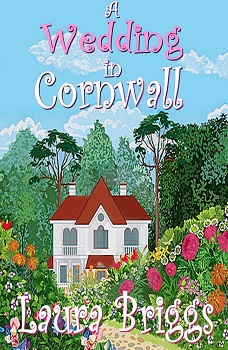 But life in Cornwall isn’t exactly as Julianne imagined it. Her first bride-to-be is a resentful, petted snob, the groom is immature and bored, and the Cornish staff of Cliffs House has a difficult time believing that an event planner from a mid-level position can handle a wedding this big. And then there’s a personal matter — the handsome, sometimes charming, sometimes standoffish gardener Matthew Rose. He and Julianne have a strangely complicated relationship somewhere between friendship and attraction. But with a secret in his past, and a scheming bridesmaid plotting to have Matthew all to herself, will Julianne find a way to untangle her feelings and the problems of planning a perfect Cornish wedding?

Not long. This was a novella, less than a hundred pages, so the actual writing time was really reasonable. It’s also one of my self-published works, so I was in complete control of the publishing process.

More time was required for researching the book’s setting, as I haven’t been lucky enough to visit Cornwall yet. And as an American author writing about an English setting, I knew I was bound to make some mistakes, but I wanted to make as few as possible.

No writer’s block for A Wedding in Cornwall, but I’ve had it for plenty of other projects. I find the only way to really overcome it is to step away from the project for a few hours or even days. Often, the inspiration I was looking for will come at unexpected times, like when I’m washing dishes.

11) How did you come up with the name(s) for your lead character(s)?

Julianne was chosen at random from a baby name book. It’s a great name, very pretty and feminine, so it wasn’t a hard choice to use it. As for Matthew, it’s a very classic name I thought readers would like.

As an event planner, Julianne is used to thinking on her feet. She has to be able to solve any little crisis that comes her way, while staying cheerful and optimistic all the while.

Matthew is more laid back, his landscaping work and talent for nurturing plants part of his quiet charm. He’s a little bit brooding too, which never hurts in a romance book, right?

13) If your book was made in to a film, who would you love to play the lead character(s)?

For Julianne, I think someone like Emma Stone (Magic in the Moonlight, The Help) would be a great choice, because I can see her playing a sunny, optimistic person like Julianne. For Matthew, the obvious choice would be Aidan Turner from the television series Poldark, as that’s who his character is mentioned as resembling in the book.

I always have a few people read over a manuscript, whether it’s one I’m submitting to a publisher or one that I’m publishing on my own. Friends, family, longtime readers—it always helps to have their opinion before I take a book through the publishing process.

To find our more about Laura Briggs visit the links below.