What Does This Button Do? by Bruce Dickinson – Book Review

What Does This Button Do? by Bruce Dickinson – Book Review 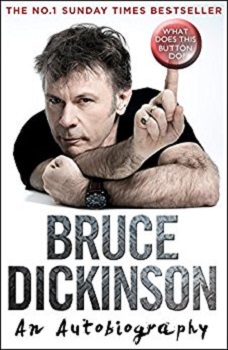 What Does This Button Do?
An Autobiography

‘I was spotty, wore an anorak, had biro-engraved flared blue jeans with “purple” and “Sabbath” written on the thighs, and rode an ear-splittingly uncool moped. Oh yes, and I wanted to be a drummer…’

Bruce Dickinson – Iron Maiden’s legendary front man – is one of the world’s most iconic singers and songwriters. But there are many strings to Bruce’s bow, of which larger-than-life lead vocalist is just one. He is also an airline captain, aviation entrepreneur, motivational speaker, beer brewer, novelist, radio presenter, film scriptwriter and an international fencer: truly one of the most unique and interesting men in the world.

In What Does this Button Do? Bruce contemplates the rollercoaster of life. He recounts – in his uniquely anarchic voice – the explosive exploits of his eccentric British childhood, the meteoric rise of Maiden, summoning the powers of darkness, the philosophy of fencing, brutishly beautiful Boeings and firmly dismissing cancer like an uninvited guest.

Bold, honest, intelligent and funny, this long-awaited memoir captures the life, heart and mind of a true rock icon, and is guaranteed to inspire curious souls and hard-core fans alike.

Bruce Dickinson is the iconic front-man to heavy metal band Iron Maiden. His journey through life thus far has been filled with adventure and challenges. Not only is Bruce the lead singer of the most famous metal band to come from the UK, but also a world-class fencer, airline pilot, brewer, author (not just this book!), amongst other things. The man is legendary!

If you are looking for a warts-and-all look at Iron Maiden, dishing dirt along the way, you will be disappointed. This book simply isn’t that. Instead, “What Does This Button Do?” provides a tremendous insight into who Bruce Dickinson is. With stories starting from his school days, this autobiography pretty much follows the timeline of his life, showing how he got involved with Iron Maiden, taking you on a journey with the band, even through war-torn Sarajevo for a gig!

In between albums and tours, Bruce learns how to fly, starting out in light planes (almost losing one in bad weather), through to Boeing airlines. Juggling that, the book mentions his attempts to improve his skills as a fencer whenever the opportunity arose.

There is a mention of Bruce’s battle with cancer (throat) towards the end of the book. This is sensitively handled given the subject matter, and I commend him on being so open and honest – many would shy away in the circumstances.

The book is very well written and is full of humour – Bruce Dickinson is a very witty man and will make you laugh. The only downside to the book for me is the detail. Many of the subjects are almost glossed-over, but that isn’t all bad, and is very understandable. If he were to go into too much detail, the book would be longer than “War and Peace”! If you like Iron Maiden or have any interest in them at all, you would be a fool not to read it.

Bruce Dickinson has been the lead singer of Iron Maiden for more than thirty years, and has pursued a successful solo career, as well as a host of interests beyond music. Iron Maiden has sold over 90 million albums & performed over 2000 shows world-wide, making them one of the most successful rock acts of all time. He lives in London, England.