The Writing Life of: Ian Wilfred

This week on ‘The Writing Life of:‘ I am thrilled to be interviewing author Ian Wilfred. Ian will be sharing with us detail of his writing life, telling us all about his latest book ‘The Little Terrace of Friendships’, which was released on 28th March 2017, and answering a few fun questions too.

So without further ado I’ll hand you over to Ian. Post contains affiliate links.

Ian Wilfred is 50+ but in his head he will always be 39. He lives on the Norfolk coast with his husband and west highland terrier. His perfect day would be to walk the dog on the beach, drink lots of coffee and write, but in real life after walking the dog, Ian goes off to work.

His first book Putting Right The Past was published in 2013 and set on the island of Tenerife. The Little Terrace of Friendships is Ian’s second book.

I didn’t really know what I wanted to do as a child, you’ve got me thinking. There was a time I can remember when I wanted to work in a shoe shop, it never happened, but I suppose that there’s still time!

As a child we had lots of Reader’s Digest books in the house, they were short and always different. I could not tell you author names, or the titles, but I seemed to remember they were quiet exciting, and grown up for a child to read. As a teenager I discovered the wonderful Mills and Boon books, I was hooked. I still am.

It just sort of happened. I had always written for pleasure and then I got the opportunity about four years ago to publish my first book, Putting Right The Past, with Matador publishing House.

The internet. I had a story and I wanted to publish it. Over many, many, months it went to and fro with editors etc. Finally in 2013 it was published.

Jumping from 2013 to the present day, I have a very blessed life. I’m up early between five and six, I get on the old Twitter and I like to wish authors a happy publishing day if they have a book coming out. It’s then my favourite part of the day, I take the dog for a walk on he beach. I then return home for a little bit more Twitter, then I write. Sadly that stops in the late afternoon as I have to go to work.

I’ve never been asked this before, but yes I did. As I write female fiction I was told I should write under a female name but decided against it. I like my own name, so that’s what I use.

I have no strange habits, but drink lots of coffee and dive straight in.

On my laptop. It’s actually one of the small notepad models.

I’ve published two novels, but I’ve part written dozens more. Over the last year I’ve been reading most of the stuff I’ve started, and I’m trying to rewrite some things that are a complete jumble.

Well, I have an idea and I then I just see where it takes me. I have read several interviews with the fabulous Milly Johnson and she says just keep writing, don’t go back over anything until you’ve written, ‘The End’. So that what I do now.

I do read the reviews, though I don’t get upset by bad ones. I would love everyone who has read my books to love them, but that’s never going to happen. I’m 50+ I don’t have time to get upset. I want to enjoy writing more. Onward and upwards as they say. 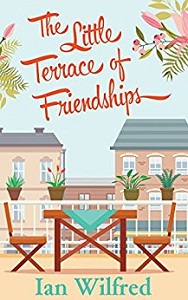 Maggie Hosking is in her early sixties, and she lived in Devon with a husband who never worked and took her for granted. But now Maggie is going to have an adventure of a lifetime taking her to London, New York and Martha’s Vineyard.

All her working life Maggie has been a cleaner in hotels and private homes. Maggie cleaned for actress Helen Heacham’s parents until their deaths, when Helen moved Maggie up to London to take care of her home. Helen lives in a beautiful terrace in Kensington along with famous and not so famous neighbours. Actors, writers, models and businessmen; they all seem to need a cleaner and that’s when Maggie’s adventure starts.

It’s not just Maggie’s life that’s changing but big things are happening for the other residents in the terrace; success, romance and fraud, but most of all friendship.

With ‘Putting Right the Past’, it took forever going to and fro, but with ‘The little Terrace of Friendships’, it didn’t take too long.

Now this is a good question, and not one I’ve been asked before in an interview. At the 11th hour my main character’s name changed, on the advise of my editor. She sounded younger than the name I used so Mable, became Maggie.

My main female characters are over 50 and have gotten to that point in their lives where enough is enough. They want to have a bit of fun, and that is what seems to happen for them.

The hardest scene I have written was in my first book. A character died at a party as a song is sang. I found that hard to write. The song was the Beverly Knight hit, ‘No One Ever Loves In Vain’.

Hours of thinking up stupid titles. Eventually I went back to where the bulk of the story is set and that’s how it became, The Little Terrace Of Friendships.

No not this time. No friends or family knew about it until it was published, apart from the other half whom I had told a couple of weeks prior to release.

The lovely author, Debbie Viggiano, introduce me to the fabulous Rebecca Emin, who basically got me through every stage. I always say, I wrote the story and Rebecca added the magic.

Panic, because that’s when the real work starts. Rewrites, and everything that goes with it.

I have started three stories that I’m so excited about. They are completely different from my other books. I’m more excited about one of them then I ever have been before, plus it is set in beautiful Norfolk.

There is only one, it has to be cheese. Any sort, but top of the list would be Stilton.

It would have to be a bright one. Either yellow, orange, or red.

Another easy answer, Pretty Woman, followed by Steel Magnolias, and then Beaches.

This is difficult as I love so many different types of music, but I will go for anything by Gladys Knight.

A bigger home so I could have a room/office to write in.

You can find out more about Ian by visiting the website/social media sites below.

I would like to say a big thank you to Ian for sharing with us details of his writing life, and for a wonderful interview.