The Writing Life of: Nicholas Nash

This week on ‘The Writing Life of:‘ I am thrilled to be interviewing author Nicholas Nash. Nicholas will be sharing with us detail of his writing life, telling us all about his latest book ‘The Girl at the Bar’, which was released on 1st February 2017, and answering a few fun questions too.

So without further ado I’ll hand you over to Nicholas. Post contains affiliate links.

Nicholas Nash is a simple person at heart who loves reading, traveling, and listening to music. He live with this semi-nagging voice inside his head that always wants to talk, telling him things he should be doing, thinking about or writing. He doesn’t always listen to this voice, but he finally decided to give it a chance and we wrote ‘The Girl At The Bar’.

He live in Manhattan in New York City with his wife and three children.

Initially I wanted to be an astronaut and fly to the moon. After that it was an airline pilot so I could fly often. I still hope to get a pilot’s license at some point in the future.

Ayn Rand was one. She’s a bit dramatic to read when you’re that age but was good nonetheless. I devoured almost every Sidney Sheldon book that existed growing up. And oh, of course, Jeffrey Archer too.

Pretty late. I’m in my late-thirties and started writing unexpectedly. I’ve been enjoying this phase. I hope I continue to write and enjoy it as much as I currently do.

I work during the week so it’s difficult for me to write much then. So I write on weekends. It takes up time that I could spend doing other things or with family but I enjoy writing and it’s worth making the time on weekends to do so.

I don’t target any specific number of pages but do keep an eye on the word count. One of my most productive weekends was a 10,000 word count weekend.

I wrote THE GIRL AT THE BAR during the summer. I would pack ice cream, yogurt and some cold drinks and head to the nearest park with my laptop and write there. It’s difficult to write on a laptop with the sun beating down hard but the ambience and the leisurely pace of being able to write in a park is truly amazing.

I enjoyed doing that and plan to do that every time in summer. Maybe next time I’ll do it at a beach.

I write on a computer. However, I draw out my story lines and characters on a note pad in advance. That’s really where the story takes shape.

THE GIRL AT THE BAR is my first book. It revolves around the disappearance of a top cancer researcher, Rebecca Chase.

I am currently working on my second novel set during the last days of World War II. The book title is still under wraps because I don’t want to give the story setting away just yet. There was an interesting time period during the Second World War that I chose as the backdrop.

Hitler died, having committed suicide, on April 30th, 1945 but the war in Europe did not end with his death. Germany continued fighting the Allies and surrendered only a week later on May 7th, 1945. During these days between his death and eventual German surrender, an unimaginable series of events took place that remains unexplained and shrouded in mystery to this very day. My second novel revolves around one of those events during that period of uncertainty, with my imagination filling in the blanks that history has left unanswered forever.

I first read about it a few years ago and I always wondered to myself, “What exactly happened there? Why did they the retreating Germans that? Who was really responsible? What were they thinking?”

I searched and searched and searched and never found any satisfactory answers. That was when I said to myself, “Hmm, that’s interesting. The magnitude of what happened then was immense and here we are over 70 years later and we still don’t know much about it.” That’s when I decided to write my second book around these bizarre events.

I started my first book as a pantser but soon realized that I wrote better as a plotter. I love reading about and writing about multiple characters with multiple story lines. It’s tough to do that as a pantser. You have to plot out the interwoven story lines and how the characters collide with each other as the plot unwinds.

Yes I do. I read all the reviews. I read negative or critical reviews too. It lets me know where I need to improve or focus on for my next book.

I don’t always take all of them to heart. You can always ignore certain reviews because you can’t please everyone. However, some critical reviewers do make some good points and a good author should read those and give it some consideration. 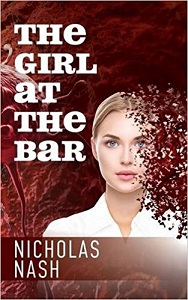 Rebecca, a brilliant cancer researcher disappears without a trace after a one-night stand with a neurotic man with a questionable past. Her sudden disappearance in the midst of a high-stakes quest to cure cancer between two rival billionaires sets into motion an inexplicable chain of events as the bodies start to pile up.

No one knows why she disappeared. The race to find answers ensnares everyone around her, one of whom is a deeply disturbed psychopath lurking in the shadows.

Is Rebecca still alive? What happened to her? Who did it? And why? Questions about her vex everyone looking for answers. No one can be trusted and no one is above suspicion.

THE GIRL AT THE BAR took me five to six months to complete and another three months to get to the publication date. I learnt a lot during this process and hope to leverage that to complete my next book much faster.

It’s an iterative process. There’s no right answer but needless to say I’ve changed the names of my characters, especially the last names, multiple times till I felt good about it.

Rebecca Chase is a brilliant cancer researcher. She is an extremely attractive and smart person who everyone likes. She is someone who can get whatever she wants in life just based on her looks. However, she wants to use her intelligence for a higher purpose in life, namely to find a true cure for cancer. She believes that intelligence is a gift that must be used responsibly and not wasted.

Ragnar Johnson on the other hand is a brilliant person but down on his luck at the beginning of the book as well as an introvert. The book covers some of it but as background he is a math whiz who is “seduced” to join a high paying job on Wall Street. He soon learns that things are not what they seem and Wall Street can be a cruel unforgiving place.

The last few chapters were really difficult. I had to tie the story and all the loose ends together well. I really spent a lot of time thinking about those and writing them to make sure it all made sense. I read and re-read those numerous times till I was satisfied.

It’s funny you ask. I chose the title THE GIRL AT THE BAR after writing maybe the first couple of lines of the book. The first chapter is about this strange guy meeting this stunning woman at the bar and I chose the simplest title I could think of. As I continued writing the book, I felt this was a pretty apt title and I liked the simplicity behind it.

It’s such an easy concept to understand. Everyone at some point has met a person of the opposite sex at a bar that they remember fondly. I felt like the title had that ring to it.

I met a good independent publisher, Fireflies Publishing. I heard the pitch and passion and decided that they were the ideal fit for me. End of story. I did not bother getting my backside kicked chasing the larger publishers.

Read it and re-read it multiple times to make sure the story fit together and there were no loose ends. There were some chapters that I read after a long time and I was floored that I wrote them. There was one that made me weep.

I am currently working on my second novel set during the last days of World War II.

Stairway to Heaven (extended version from The Song Remains the Same) by Led Zeppelin. Jimmy Page’s guitaring on the long solo is just mind-blowing.

It would make its way into a retirement account. I’m a very simple person and enjoy the simple things in life. I think I’ve heard this somewhere – Mo money mo problems. Is that how you say it? You get the idea.

“What did you write today for me to read? It better be good…”

You can find out more about Nicholas by visiting the website/social media sites below.

I would like to say a big thank you to Nicholas for sharing with us details of his writing life, and for a wonderful interview.