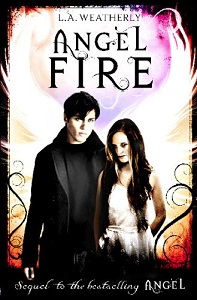 Only Willow has the power to defeat the malevolent ‘Church of Angels’, and they will stop at nothing to destroy her.

Willow isn’t alone, though. She has Alex by her side a trained Angel Killer and her one true love.

But nothing can change the fact that Willow’s a half-angel, and when Alex joins forces with a group of AKs, she’s treated with mistrust and suspicion.

She’s never felt more alone…until she meets Seb. He’s been searching for Willow his whole life because Seb is a half-angel too.

Angel Fire, is the second book in the Angel Trilogy by L.A. Weatherly.

The book carries on from where the last book ended, and would not be a book you could read as a stand alone.

The story revolves around Willow, a half-angel and her boyfriend, Alex an Angel Killer (AK), and their mission to rid the world of the angels who are here to take over the Earth, feeding off people.

In the second book we are introduced to some new characters including Seb, another half-angel, who has been searching for Willow his whole life.

Seb is in love with Willow, and with Alex now training new AK’s who distrust her, Willow is beginning to feel alienated. Only Seb is there for her, bringing on a love triangle.

I didn’t much care for Seb. I understood how much he was in love with Willow and that he has been searching his whole life for her, but I couldn’t connect with him and I certainly didn’t want Willow leaving Alex for him.

The book is more in depth than the first and we get to find out more about the character’s lives, and what they’re really capable of.

I love Alex and his no-nonsense, tough, gets-the-job done characteristic. He’s the type of person you would want to be around in a dangerous predicament.

Willow is coming of age and although she is a young, determined, strong woman, she also has a lighter, softer side to her that is confused by the whole, ‘Alex and Seb’ situation.

Keeping me gripped in its pages and taking me on an emotional roller-coaster, "Angel Fire", is on a par with the first book in the Trilogy. Willow and Alex’s love for one another is evident throughout, even when they’re at loggerheads with each other.

Fast-paced throughout, and lots of action, will help keep you engaged with the story. I understand that this is a YA, paranormal book, but at 700 pages long it didn’t feel nor read like a YA book.

I loved this series so much that I read the three books in a week.