Be Frank With Me by Julia Claiborne Johnson – Book Review

Be Frank With Me by Julia Claiborne Johnson – Book Review 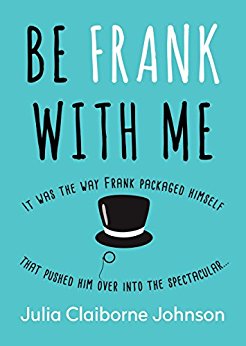 Meet Frank – a modern nine-year-old boy with the wit of Noël Coward and the wardrobe of a 1930s movie star.

Meet Mimi Banning – a reclusive literary legend and mother to Frank. Mimi has been holed up in her Bel Air mansion for years, keeping her secrets, hiding from the world. Until Alice.

Meet Alice – a level-headed young woman who finds herself thrust into the Banning household, charged with looking after Mimi’s unusual son. In so doing, Alice discovers a part of herself she never knew was missing.

Full of heart and humour, Be Frank With Me is a captivating and unconventional story of an unusual mother and son, and the intrepid young woman who finds herself irresistibly pulled into their unforgettable world.

Be Frank With Me immediately stood out with its bright teal cover and simple artwork – I enjoyed the aesthetic and it fits perfectly with the persona of Frank, too.

Be Frank With Me is told through the eyes of Alice, a young twenty-something sent to help out at the home of M. M. Branning (Mimi) whilst she knuckles down and writes a sequel to her one hit wonder novel. However, it isn’t just boring house cleaning and upkeep – Alice also has to look after Mimi’s eccentric son, Frank, who is the real star of the book.

Reading this book in the 21st century, it is obvious that Frank has some form of disability or mental health problems. Whilst I’m definitely not an expert, so cannot delve further into this, I enjoy that there is no mention of this throughout the book. Yeah, Frank sees a psychiatrist, but is there an official diagnosis? No. Frank is Frank – the energetic, curious, eccentric, highly intelligent Frank.

Frank is very similar to his Uncle Julian – I think this highlights that whilst times may change and we now feel as though we all MUST be diagnosed if we are slightly ‘different’, this has not always been the case. Yes, a diagnosis may help Frank and his family in understanding his actions and controlling his outbursts, but at the end of the day he is still a loved, happy little boy – diagnosed or undiagnosed. Just goes to show that we don’t always necessarily need a ‘label’ for our differences, flaws or issues.

Frank is such an intriguing character, that I was eager to continue reading to learn more about him. Some reviews online state that there isn’t much of a plot, and it’s pretty boring. I have to disagree. Yes, this novel isn’t full of action and drama, but the fact that it doesn’t need to be packed to the brim of energetic events shows how strong a novel it is. To some, half a page of factual information was overkill, but in my opinion, without Frank’s monotone fact recital it would be difficult to understand the speed and way in which his mind jumps from one thing to another – one of the key things that make Frank, well, Frank!

The author has managed to portray Frank in a believable manner (I feel the urge to note that I cannot call Frank’s character ‘realistic’ as I don’t know anyone with any similar attributes to compare), and also hits the nail on the head of Alice, too. Xander, on the other hand, I felt difficult to grasp. I didn’t really think he added much to the plot and found his household role difficult to understand. I do get the gut feeling he may have been added in afterwards, in order to get a couple of pages’ worth of romance in the book.

Mimi, also, was a strange one – whilst I found her character difficult to understand on paper, I feel as though she would make an excellent character should the novel ever be made into a film. I would LOVE to see this made into a high budget film FYI – J-Law would make a fab Alice!

The only negative I have to say about this book, is that I wasn’t left completely satisfied with the ending. I guess I just wanted it to end differently, although I do like that the story-line is left open – you could very easily write a sequel, as there isn’t any devastating finale or restricted cliff-hanger. I would happily read more books on Frank’s life and would love to see how he ages whilst remaining his eccentric self.

There was also a lot of loose ends that I feel need tying up – what happens when Mimi finds out Frank hasn’t been going to school? What happens with the information Alice learned in the Dream Bunker?

Overall, I found Be Frank With Me a brilliant read – uplifting yet saddening, the book had me smiling away and on the verge of tears on numerous occasions. My review doesn’t do this book justice at all. All I can say is I highly recommend you pick it up and give it a read. 5/5 from me – and trust me, I don’t give out 5/5’s easily! 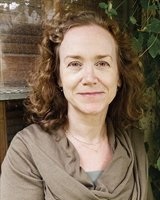 Julia Claiborne Johnson worked at Mademoiselle and Glamour magazines before marrying and moving to Los Angeles, where she lives with her comedy-writer husband and their two children.