What if the one thing meant to keep you alive was used to kill you?

Embattled CEO Jack Getty is nervous. This is his final chance to save his company. He is announcing his firm’s breakthrough discovery at the world’s largest annual biotech conference. A discovery that trials show will extend human life by 75%. But as Jack approaches the podium, he suffers a major heart attack and collapses on the stage, stunning the conference attendees.

Jack is rushed to the emergency room where surgeons implant the latest Wi-Fi enabled pacemaker, saving his life in the process. What Jack doesn’t know, however, is that an underground hacking group has its sights set on manipulating his “secure” pacemaker to get information only he can provide. Despite the hackers unrelenting terror, Jack refuses to give them what they want and soon starts to uncover the true motives of this mysterious and powerful group.

Fast-paced and complex, this thriller twists and turns as it stays one step ahead of the reader. Readers will find it a heart-pounding novel that dances on the fringe of the dangers of our modern technologies and their ability to connect us all.

Cardiac, opens with the main character, CEO of a pharmaceutical company, Jack Getty about to give a speech to a large crowd at a conference regarding his company, where he sees it heading in the future, and their latest product.

Just before he goes on stage, Jack is given something to drink. He is told that it will stop his mouth from drying, and not let any mucus buildup in his throat during his speech. However, that is not all that was in the drink, subsequently Jack collapses on stage.

Blue lighted to hospital with a suspected heart attack, Jack ends up having to have a pacemaker fitted to save his life. His wife visits and agrees to let him break the news of his health to their two sons.

The pacemaker, though isn’t a normal one, this one is wifi enabled and can, and does, become taken over by people whose goal is to control Jack and, hold him for ransom.

The story moves on at a nice pace, the language was easy to follow and I loved the mystery surrounding those who were technically playing with Jack’s life. I did find it hard to believe that Jack could survive the attacks on his health, but this did not spoil my enjoyment of the book.

I also liked the secondary plot of an ex-employee wanting to take revenge on him. Cardiac is a fantastic thriller that may just get your heart racing!! 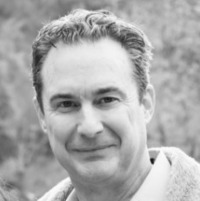 Jeff was born and raised in Southern California. He moved to the Bay Area in 1998 where he lived for 17 years before moving to Portland, OR for a slower pace, better fishing, and food carts.

Aside from his writing, Jeff is a Silicon Valley Marketing Executive with an unhealthy obsession for technology. He lives with his wife and two children.