Cash Valley: To Bring One Down by Ryan K. Nelson – Book Review

Cash Valley: To Bring One Down by Ryan Nelson – Book Review 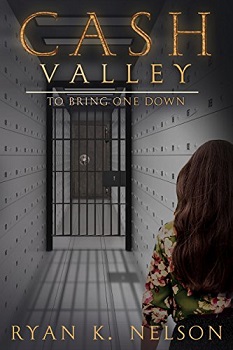 Cash Valley: To Bring One Down

Agent Alex Travis returns to Cache Valley in search of an escaped prisoner, who bears a striking resemblance to one of the gang members Jack killed in the shootout in Green Canyon four years earlier. His instincts are leading him in the right direction, but he continues to be one step behind the man seeking revenge on Jack & Kate, and their young daughter, Emma.

By not telling the whole truth of the missing bank money at the time of the recovery, Agent Travis has put them all in jeopardy. He must now decide if he can solve this case on this own, in time to save his friends, or if he risks asking for help from the Bureau and ruining his career in the process, a possibility that could land him in jail as well.

In a race to see who finds who first, the search shifts to nearby Logan Canyon, where Agent Travis will be tested by his own conscience as much as by the man he’s hunting.

I have not read the first book but that did not diminish my enjoyment of this sequel in any way, other than to encourage me to read the original book.

Ryan K Nelson has expertly recreated the feeling of 1950’s mid-western USA with a fast-paced but simple to follow plot.  It was easy to read with enough twists and turns to keep the reader interested.  There are also a few large chunks of cheese to warm you up and to counteract the violence.

There is a relatively small list of characters but Nelson gives an insight to all of them.  I could not help empathising in some way with each of them, even those who were on the wrong side of the law.  The lead protagonist Agent Travis is a classic lone-wolf Federal Agent with a good record gained from methods that are frequently outside the text-book.

He is referred throughout as “Agent Travis” and I must confess to not reading the word “Agent” as I worked my way through the book; it did get repetitive.

In terms of quality the book could benefit from a re-edit as there are a large number of spelling and grammatical errors including some doubt as to whether the featured location is spelt CASH or CASHE.

All in all, Cash Valley: To Bring One Down is a lot of fun, providing simple entertainment where the good guys win and the innocent live happily ever after. I have given it four stars.

Ryan K. Nelson, originally from the San Francisco Bay Area, now lives in Salt Lake City, Utah. A graduate of Brigham Young University-Idaho, he works full-time in the banking industry, which lead to the inspiration for his debut novel, Cash Valley.

He recently discovered his love of writing, proving that even boring Bankers have an artistic side. He spends time outdoors, golfing, attending the symphony with his wife and loves going to the movies. When he does have a free minute, you will usually find him in the den working on whatever he can come up with next.