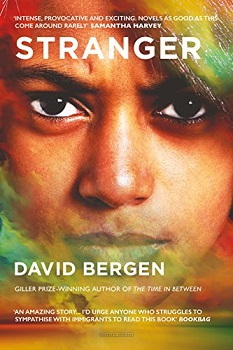 By the Giller Prize-winning author of The Time in Between, an ageless story in which the themes of immigration and refugees, exploitation and vulnerability, rich and poor collide to make a powerful and affecting novel. The profound intelligence and political resonance readers have come to expect from David Bergen are on rich display in his new novel.

Íso is a young Guatemalan woman who meets a charming doctor, Eric. When an accident forces him to unexpectedly leave Guatemala, Íso is left heartbroken and pregnant. But her dreams of raising her newborn come to a halt when her daughter is abducted and taken to America.

Determined to reclaim her stolen child, Íso makes her way north, descending into a world full of danger. In a place of shifting boundaries, she must decide who she can trust, aware that a wrong decision could mean losing her daughter forever.

From the first page of Stranger it is clear why David Bergen has a dozen published novels to his name and why he has won awards.  His writing is so atmospheric; I felt as though I was floating amongst the action in some sort of dream.

Part of this is his non-use of speech marks, a technique I have seen before and which can take some getting used to but Bergen really makes it work. Theoretically the story is told in the third person but the author follows Íso and puts us inside her head.

The initial storyline is familiar. A young, innocent local girl is attracted to a tall, handsome US doctor; married but supposedly separated from his wife. Initially we have some real tension as the wife and mistress are thrust together for a while. I won’t spoil the story but as expected the man leaves and the girl is left pregnant. Just as it seems she is coping with the situation the baby is taken away from her.

The book develops with far more action when, against the odds, Íso manages to travel to the USA in what is a very moving story of life as an illegal immigrant. Along the way she meets many challenges but she also receives some wonderful human kindness.

Migration is currently one of the world’s biggest issues and here David Bergen has contributed to the discussion.  However the moral does not end there.  Strangers is also a tale of the abuse, both deliberate and innocent, of the world’s poor by the world’s wealthy.

This was an almost perfect read and I have awarded Strangers a near-perfect four and a half stars.

Born in Port Edward, British Columbia, author David Bergen worked as a writer and high school English teacher in Winnipeg, Manitoba, before gaining a great deal of recognition in Canada when his novel The Time In Between won the 2005 Scotiabank Giller Prize, one of Canada’s most prestigious literary awards. The novel also received a starred review in Kirkus Reviews and was longlisted for the 2007 IMPAC Award.

Additionally, Bergen has received the 1993 John Hirsch Award for Most Promising Manitoba Writer, and the 2000 Canadian Literary Award for Short Story.

In 2008, he published his fifth novel, The Retreat, which was longlisted for the Scotiabank Giller Prize, and which won the McNally Robinson Book of the Year Award and the Margaret Laurence Award for Fiction.

Bergen currently resides in Winnipeg, Manitoba with his family.