In Carniskey, a small fishing village in Ireland, the community is divided, wracked by grief and guilt; love and resentment; despair and hope.

Sean Delaney has been missing at sea for three years, and no one – least of all his grieving wife, Alison – knows what really happened to him. Having lost her husband, her financial security, and having grown distant from her daughter, Alison feels alone and estranged from the villagers.

Sean’s mother has not spoken since her house was burgled after his disappearance, and Alison’s only friend, Kathleen, harbours secrets of her own. Isolated by their stunning, yet often cruel, surroundings, the community is forced to look inwards.

But when artist and lifelong nomad William comes to town, he offers Alison a new perspective on life – and love. What she doesn’t realise is that strangers have secrets of their own, and William’s arrival threatens to unearth the mysteries of the past.

A story of courage and humanity, we follow a community through their struggles and triumphs in love, loss and betrayal. As each of the characters strives to find their own sense of belonging, they are led to the realisation that it is only through the truth that they can truly find happiness.

‘Finding Alison’ is the second full-length novel by best-selling Irish author, Deirdre Eustace. This is a multi-layered tale which touches on many raw emotions, sometimes making for difficult reading.

Structurally, the story is told in chronological order, with a bit of backstory dropped in, where necessary. The chapters are fairly evenly spaced and divided into subsections. There is a good balance between dialogue and description and Eustace has a fluid writing style, keeping her pace steady. We see a lot of the story through Alison but at times we get different perspectives from her network of friends and family in the aftermath of tragedy which took Sean Delaney away from his wife and child.

The cover is simple and engaging. Alison is looking out to sea and it’s left to the reader to imagine her thoughts and the pain etched into her features.

The author has made use of many descriptive literary techniques with her main device being anthropomorphism. We have copious examples of personification, from a bleeding sky to the kiss of the breeze. The end result is a rich tapestry, providing a colourful backdrop against which each cast member plays their part in Alison’s story. There is also a poignant example of foreshadowing which brings an additional element of pathos to the plot, just when I was beginning to think I knew the direction the story was heading.

Alison is a three-dimensional character with whom the reader immediately sympathises and she has a very able foil in the form of Kathleen. In William, we have a strong enigmatic personality; neither stereotypical hero nor anti-hero. He becomes a quiet, gentle, supportive presence in Alison’s life and the tender relationship which builds between them is almost tangible.

This deeply moving story touches on many aspects of life with heartache at the fore but the overriding theme is discovery; ‘Finding Alison’ is just that – a voyage of soul-searching, self-awareness and ultimate acceptance.

As the plot develops, Eustace throws in some twists and whilst I had correctly guessed Kathleen’s sign-posted secret long before the reveal, it didn’t diminish my overall enjoyment of the book.

If I’m being pernickety, I was a little uneasy when we delved into more than one person’s head in the same section. At times I was unsure whose thoughts I was sharing, particularly in scenes between Alison and Kathleen, when the pronoun was ‘she’.

‘Finding Alison’ will appeal to anyone who likes an in-depth, gritty, thought-provoking read. It is testimony to Deirdre Eustace’s skills as an author that this sensitively-written, emotion-focused novel held my attention from start to finish, which is no mean feat as I’m pretty much a murder mystery fan. This is an excellent work of fiction and I have no hesitation in awarding five well-earned stars.

Deirdre Eustace, is a native of Bonmahon, Co Waterford. Her poetry and short stories have appeared in a variety of publications including The Waterford Review, Volumes 1, 2 and 3; Under Brigid’s Cloak; Gathering Together; Ireland’s Own; Galloping On; Syllables and the American White Star Journal.

Her work has been broadcast on both local and national radio. Deirdre’s first novel, If I Trust in You, described by the Irish Independent as ‘tense and gripping… a riveting debut’ was published in July, 2009. It remained in the top sellers list for several months and won a Publishing Ireland ‘Book of the Month’ Award.

With over twenty years experience as a writer, editor and proofreader, Deirdre is a full member of the Association of Freelance Editors, Proofreaders and Indexers (AFEPI) Ireland. Finding Alison is her second novel. 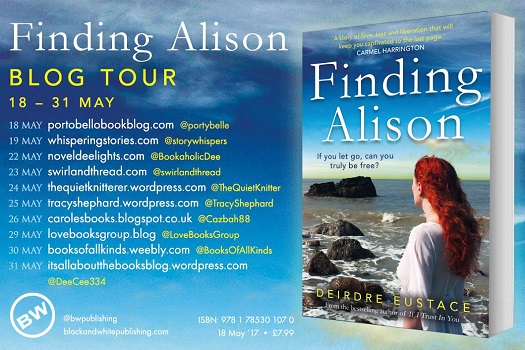