A Danger to God Himself by John Draper – Book Review

A Danger to God Himself by John Draper – Book Review

Imagine if a Mormon missionary went insane on his mission. That’s A Danger to God Himself—a book with everything. Drama! Comedy! Sex! The God of the universe striking people dead.

Mormon missionary/onetime hedonist Kenny Feller has realized that God isn’t about to give him an ounce of the miracle power he needs to succeed on his mission—as promised. What’s more, he’s concluded that, frankly, people aren’t worth the trouble. Then his new junior companion shows up—the wisecracking Jared Baserman—and immediately starts hearing heavenly voices and seeing fantastic visions. For Kenny, it is immediately clear that God has sent Jared to propel him into Mormon Manhood.

But Kenny’s not the only person who takes note. Interests both virtuous and malevolent cozy up to Kenny and Jared, eager to make use of Jared’s gifting. At first, Kenny takes this as a sign that his perceptions of Jared are spot on. God is using Jared.

But something’s not quite right.

Specifically, why in the hell would God choose someone as slope-shouldered as Jared—someone so unreligious, so strange—to be a channel for His supernatural power? He doesn’t even read the Book of Mormon. Plus he smells funny. As their tracting grows fruitless and Jared’s messages grow more bizarre, Kenny begins to wonder: Is Jared really touched by God?

‘A Danger to God’ is the début novel from American author John Draper. It’s a satirical work, written colloquially and predominantly in the first person, through the eyes of the main protagonist, Kenny Feller.

The black background of the cover design and the way the letter ‘O’ is formed could be symbolic, I’m not sure. However, it is bold and will stand out from other titles to attract the casual reader.

A lot of background research into the Mormon faith has clearly gone into this work and I commend the author for sticking to his task. Draper makes full use of literary devices such as irony, sarcasm, cynicism, alliteration and humour to tell his tale. I particularly liked: ‘a turd in the tapioca’ and the idea of a character devising a subterfuge for speaking in tongues and deciding to shout out: ‘shamma-lamma-ding-dong’ which may not mean anything to younger readers but made me smile. (For those that don’t know, it’s a song lyric.)

We witness the intricate and interwoven relationships between the players with jealousy and petty rivalries in abundance. Kenny and Jared, his main foil, are both strong three-dimensional characters and the relationship that builds between the two is compelling. Among a plethora of backstories, I particularly enjoyed Jared’s which gave a detailed insight into his early life.

The novel is clearly written and maintains an even pace at the beginning, certainly piquing my curiosity. The tempo and mood changed in the middle of the book with a darker theme coming to the fore. Complex and emotive areas are touched on, which may challenge or unnerve some readers. Towards the end, there is another change of emphasis and the focus turns to theodicy with a result that the momentum tends to sag slightly.

For me, this was a book of two halves and I’m not convinced that they belong together. What started out as a light-hearted humorous dig at organised religion suddenly plunged the reader into a deeply disturbing account of a character’s submersion into their own private hell and its aftermath. Whilst it is definitely thought-provoking, I’m not sure of its intended target audience.

As a fan of satirical fiction, there were aspects of this book that I admired; I certainly enjoyed the first half of the tale and was intrigued and unsettled by the second. I struggled with a rating but on balance, whilst I have some difficulty with the structure, the strength and quality of the informal writing style wins through and I award ‘A Danger to Got Himself’ four stars. 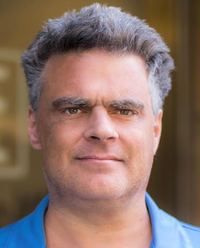 So . . . about me: I’ve known I wanted to be an author since I was 9. Life got in the way, though. Specifically, I finished college, landed my first newspaper job, got married, got divorced, raised my three amazing kids with my wonderful ex. Turns out, life’s a lot of work. During this entire time, I was employed as a full-time writer, strictly nonfiction–though dramatic nonfiction, I like to think.

Anyway, when my kids got old enough, around my 50th birthday, I was able to devote the time necessary to write a novel. So I did. Little did I know how much time would be “necessary.” Why didn’t someone warn me writing a novel’s so hard?

A Danger to God Himself is my first book, written almost entirely at a coffee shop in Puyallup, Washington, and a bar in Tacoma, Washington–mornings and nights, respectively.