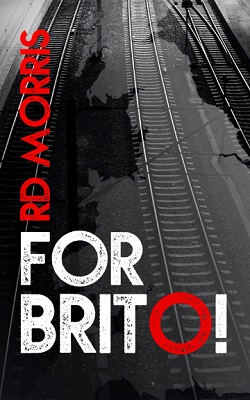 The year is 2059 and Great Britain is dead. Now, you will live and die for Brito. How dark will this dystopia be?

Described as delightfully unsettling dystopian fiction that is far too close to home, For Brito! is a daring book that takes recent political events and projects them into the near future to examine potential consequences.

It’s a reform like no other. You’re in Britain, but it’s different. All borders are blocked, society has shrunk and the people are driven by a public purpose. A purpose, that is, programmed by the regime.

BRITO has enslaved the population by destroying individuality and replacing it with a devout dedication to the nation. Class, race and difference have disappeared and all that remains are those that work and those that do not. By any means necessary, a corrupt chain of command manipulate the ‘Operatives’ to function, while their sole enemies are the unemployed ‘InOps’.

When Operative Everley bonds with a non-worker, his feelings wriggle free from the clutch of the commanding hand that controls his mind. His changes in behaviour are spotted by the immoral eyes of his aged superior, Raines, whose wistful yearning for Great Britain causes him to bring an impatient violence to his management style. All the while, a member of an underground organisation is watching and wanting to free Everley before he is banished, brainwashed or ordered to death.

This Review for ‘For Brito!’ has to be the hardest I’ve had to write this year as I finished the book feeling very unsure what I felt about the book. The star rating in my head moved between 2 stars and 5 stars as I read and swayed back and forth as the novel progressed.

I’ll be completely honest at the beginning I nearly DNF the book and this wasn’t anything to do with the story it was that I disliked the paperback copy I had and I’m not a fan of long chapters. There was one saving grace though and that was that I was enjoying the plot and so I forced myself to continue, and I am glad that I did.

I have a fondness for Dystopian novels, and what could be better than one being set in the country you live in. Author RD Morris had a vision of what the future UK could look like after Brexit. Fast forward to the year 2059 and Brito as the UK is now called has closed its borders, there is no coming in or going out. Society has been placed into two classes, those that work (Operatives) and those that don’t (InOps).

The Operatives are manipulated individuals who see themselves as above everyone else. They have all the power, money, food, etc whilst the InOps have nothing. They have no food, or money, benefits don’t exist. They are seen as the scum of the earth and there are no laws stopping the Operatives from killing the InOps.

The book was slow at first whilst the author explained his world-building and introduced us to his main characters. The chapters were long and drawn out but once the initial explaining has been done everything changed. The pace picked up, the characters became more enjoyable to read about and poor Britain or Brito was no longer a place recognisable.

The book is heavily filled with politics as the government control everything. This is a novel every dystopian fan needs to read. You can already see some aspects of the book in society today which is quite alarming, especially with the pandemic still looming and people seem to be less caring towards one another rather than the ‘all in this together attitude at the beginning’. RD Morris has an amazing imagination that will play with your head and have you hoping that Brito never becomes a reality.

I have been a writer for as long as I can remember. I’ve spent my life carrying around notes upon notes in notepads and on train tickets and scrap pieces, so that you wouldn’t know my pockets full of bin matter are actually a great many works in progress.

After achieving a First Class degree in English Literature, I found myself working for UK Government. Though I wrote magazine articles for the Military community at first, this shifted into drafting training material, then business documents and other creatively-muted outputs that left opportunities for poetic prose and beautiful language wanting. But, despite the challenges of each of job role of the decade that followed, I always found the time to write.

I spent my twenties blogging. This started when I left my home (a small village in South West England), and moved alone to a large city “Up North”. I remember feeling I might, at any minute, be eaten up by the huge buildings or swept away by the whirlwind of passing people in those busy places. It was such a new environment that it inspired much of my writing. I found myself idealising the pastoral settings of my upbringing and comparing these to the pandemonium of a city. In hindsight, this time may have been one of the greatest influences on the genre I now write: dystopian fiction.

After a significant amount of research into some of the key themes in the book (which I won’t spoil for you now), I began For Brito! – that was some three years ago now. Unfortunately, soon after I started hammering at the keyboard, I developed a chronic sight condition. Whilst trying to deal with this impairment, I stopped typing my ideas into chapters. But, as any writer will tell you, it’s not the sort of thing you can stop doing for long. I was writing in my brain anyway; I just had to find a way to get it through my fingertips and into a laptop. I persevered, and completed For Brito! early in 2020.

Then, when Covid hit, I thought ‘Nobody will want to read dystopia now!’… but I was wrong. 1984 is top of the pops again in Amazon’s charts and, with so much uncertainty in the world right now, perhaps escaping into a dystopic story for a while will remind us of the small liberties we still have despite lockdown.

I hope you enjoy following Everley’s story as he struggles to identify as a human from within a regime of manipulation, supervision and control.