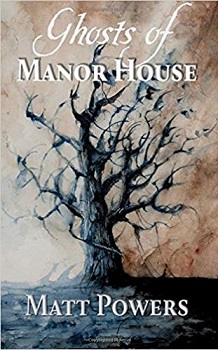 Edmund and Mary Wilder are very much in love. But the death of their young son, Tommy, has shattered their family. Edmund is determined to bring them back together, drawing on the only bit of strength he has left—his love for Mary and their daughter, Stephanie. But Mary sinks deeper into depression while little Stephanie’s anger grows. Edmund flounders in his attempts to rescue his family from the brink of collapse and doesn’t know where to turn.

Then Mary receives an invitation for the family to become guests at Manor House, a seemingly quaint Bed and Breakfast. This, she assures her husband, is the answer to all their troubles.

Edmund arrives ahead of his family to spend a couple days working on his long-delayed novel. But his growing curiosity about the old house leads Edmund to an encounter that will change him forever.

What will you sacrifice for love?

Ghosts of Manor House is a short ghost story of just 202 pages, I’m not sure where this book would sit genre-wise as it’s not quite horror, not really a thriller, I can’t say it is suspenseful either, it is just a lovely interesting ghost story, though without the scary side to it.

Edmund and Mary’s son Tommy has recently died and Mary is struggling to come to terms with his death, she is very depressed. Edmund is at the end of his tether with trying to make Mary happy so when they are invited to stay at a manor house on holiday he decides that it would be a great idea. Edmund decides to go along first for a few days to work on his novel with his wife and daughter to following soon after.

However, it turns out that the family are not quite alone at the Manor House, as well as the living occupants there are a few that have been deceased for quite some time. You get a sense of what happened to these people from the opening chapter, which I loved.

The book was a real mix bag for me. As I said the opening chapter was just perfect and I loved it. I just wish that it was longer than a few pages. We then moved forward in time and meet Edmund and Mary. I found the couple hard to connect with as I really couldn’t find anything to like about them. If I’m honest they were quite boring people.

I also struggled with the writing. The book is written in the present tense and for me, this actually lessened the thrill of the book as it is written in a tense I don’t particularly enjoy reading. There was also a lot of talking throughout, I prefer more show than tell. I also got confused a few time and had to re-read sections.

Apart from the opening chapter I really enjoyed the ghosts. If it wasn’t for the ghost I most likely would have given up – Sorry.

Overall it is a good ghost story, some shocking and some predictable moments. If you like scary books and don’t mind present tense writing then this would be a great book to choose. Especially with Halloween not far away.

Matt is the author and creator of Ghosts of Manor House and Senior Producer at Zynga. Computers and video games have been a part of his life since he was young. As a child, he always played video games and when he was ten, his Dad told him that he should try making his own. And so he taught himself to program and create games on the computer. He majored in Computer Science and enjoys working with a team of creative people. Matt has a passion for books and finds writing to be a great way to release his inner creativity.

Matt lives and works in the busy and vibrant metropolis of San Francisco where he is surrounded by extraordinary views of the ocean. He loves how the city is filled with a variety of people and activities – there is always something to do and new to see. In addition to San Francisco, Matt spends a lot of time in Grass Valley with friends and family where he can escape the concrete jungle for the relative calm of this gold mining sierra town. This is where the characters and story of Ghosts came to life.

He loves to write because he can use his wacky and twisted imagination to create interesting characters that he brings to life on paper. Matt’s writing process with Ghosts started with a concept, “write a creepy haunted house story.” Ideas became scenes, which became characters that created a story. Matt made a deal with Manor House to tell its tale and so he did, but at what price?