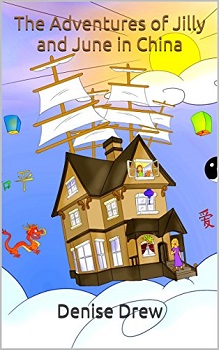 The Adventures of Jilly and June in China

Jilly is a young girl who lives with her mother June, and Jimmy the ginger tom cat. Their home is no ordinary house, but a magical flying house that takes them on many hilarious adventures. Where do they go?

Join them, and read to find out what happens when they arrive at the Forbidden City and meet the Emperor of China.

The Adventures of Jilly and June is a book series that chronicles the international escapades of a young girl and her mother as they travel around the world in their miraculous home.

Jilly lives in a magical flying house with her mom, June, and their ginger cat named, Jimmy. This amazing house, located by the sea, is unlike any other; it flies to some of the most amazing countries on earth like India and Russia.

In the latest installment of the series, Jilly and her mother, June, fly to China and meet the emperor. After they attend a wonderful banquet, listen to a Chinese opera, and take a tour of the Forbidden City, Jilly and June decide it’s time to go. With a hasty good-bye to their new friends, they enter their extraordinary house and fly back home.

A very cute idea. I found the book to be reminiscent of American author, Mary Pope Osborne’s, The Magic Tree House Series. The opening sets a lovely scene and Drew does a nice job of weaving interesting facts into the story. I also enjoyed the little character details like spaghetti bolognaise being Jilly’s favorite food to eat.

However, I do feel there were a few missed opportunities for further character and story development as well as moments of conflict in the story that were too easily resolved. I was also confused as to what year the story took place. I feel this is an important story element the reader needs to know from the beginning. Being told from the outset the time frame of the story would help to keep certain story events in context and deepen the understanding of their significance.

I think with the proper amount of research, and a more in depth story line, this could be a wonderful historical fiction tale that children could learn from in a fun way. I give it three stars.

Denise Drew was born in Liverpool in 1970. She has raised her daughter, as a single parent, since her daughter was two years old. Never deterred by being a one parent family, Denise worked full time, provided a loving home and continued life in a strong and positive light.

As a small family, they were lucky enough to have holidays every year and this lead Denise to dream of writing adventure stories about her and her daughter travelling the world. Denise would say that she would love to pick up her house and take it on holiday with her, so they could have their home comforts. What an idea! A flying house. A magical house, with sails, that flies them to “wherever takes their fancy”.