Terrible, True Tales from the Tower of London – Book Review

Terrible, True Tales from the Tower of London – Book Review 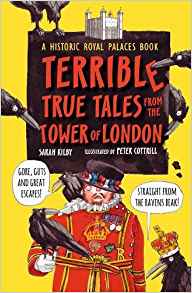 The history of the Tower of London – as told by the ravens that live there.

The ravens of the Tower of London bring its fascinating history to life, telling tales of gore, guts and great escapes. Perfect for fans of Horrible Histories, the book is illustrated throughout and packed with fascinating and funny stories that the Yeoman Warders would rather were kept secret from visitors.

Such as a daring attempt to steal the Crown Jewels, the polar bear who once lived at the Tower and the prisoner who tried to escape through his toilet.

Terrible True Tales from the Tower of London, does exactly what it says it does. It teaches children true events that have taken place at the tower over the centuries. From beheadings to attempted thefts, it is packed full of information that is both insightful, and informative.

The book is unusual in that the facts are told by the seven raven’s that live, and work there. For those that don’t know, raven’s have lived in the Tower of London for centuries, due to an ancient legend that says the kingdom will fall if they are removed.

I found the book fascinating, and learnt a lot too. I was totally engrossed in finding out more about the place. It educates without being boring, and includes detailed black and red illustrations throughout to bring the text to life.

The book does have some gore in it, well what child doesn’t like a bit of gore. The stories are also told in an amusing manner, making it interesting to read. Did you know that there have been quite a few animals living in the tower over the years? Including lions, a polar bear, and even an elephant.

Terrible, True Tales from the Tower of London is a lovely book that makes learning fun, is educational, and memorable too.

Our aim is to help everyone explore the story of how monarchs and people have shaped society, in some of the greatest palaces ever built.

We raise all our own funds and depend on the support of our visitors, members, donors, sponsors and volunteers.