A Nightingale in Winter by Margaret K Johnson – Book Review

A Nightingale in Winter by Margaret K Johnson – Book Review 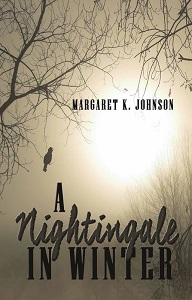 It is 1916, and The Great War is raging throughout Europe. Eleanor Martin is traveling to France to serve as a volunteer nurse. She only wants to bury herself in her work on the Front and forget her traumatic past. But when her ship is torpedoed, Eleanor has to act quickly to save an American journalist’s life. As she cradles Dirk Loreson’s broken body in her arms, speaking to him to keep him conscious, the possibility of a whole different future begins to open up for her.

Leo Cartwright, an ambitious artist, is also en route to the Front. A ruthless man who will stop at nothing to find inspiration for his paintings, Leo’s path is destined to cross with Eleanor’s. As she comes under his spell, will she find the strength to resist his demands? Will she trust her growing love for Dirk?

A Nightingale in Winter is about courage and searing ambition at a time when the very foundations of the world have been shaken.

The story follows Eleanor Martin as she flees England for France, signing up as a VAD nurse in the First World War. When the ship she is travelling on gets torpedoed, she finds herself saving the life of Dirk Loreson, an American journalist. Her life changes from this moment on.

Margaret K Johnson has clearly done her research in order to be able to write such amazing scenes. The atmosphere and settings are so clear and excellently described. When the ship was torpedoed, you felt the desperation and fright of the passengers. When Dirk’s life hung in the balance, you pleaded for him to survive, and when Eleanor faced difficult times, you willed her to carry on.

The injuries and deaths that soldiers suffered were so real and clear in the mind’s eye. Johnson draws you in emotionally with such good writing that you feel you are with Eleanor as she takes this amazing journey in order to escape her past.

We get snippets and a huge sense of foreboding about Eleanor’s past through her nightmares. She eventually goes full circle in the story and gains enough strength and courage to face her fears and confront what has gone before. We then understand and empathise with Eleanor as to why she lied to Kit about her family at the very start of the story.

The characters are all so different. Eleanor is shy, fragile, and at first a little cold, but when reading further, you warm to her and it continues throughout. Her best friend Kit, who she meets at the train station on the way to France, is free spirited and more lively. The contrast between the two characters compliments their growing friendship and they form a close bond.

Dirk is a true gentleman and falls in love with Eleanor. He has a great passion for his job, wanting the truth to be told about those lives on the battlefields and what they endure. At the opposite end of the scale you have Leo, a strong evil character who stops at nothing to get what he wants – including Eleanor. He is an artist and doesn’t care who gets in his way or who he harms in order to find inspiration for his paintings. He hurts many people along his journey in the most shocking of ways, and without giving too much away, there is retribution for his character.

I missed Kit when she left for England mid-way through the book and I wondered if the story would falter slightly, but Eleanor’s story continued and became stronger, and I was drawn in.

There is one particular moment that gripped me so much, I gasped and yelled ‘nooooo’ when I sensed what was about to happen after Dirk came to find Eleanor. My hand flew to my mouth and I found I was shaking my head wishing Dirk hadn’t seen what he mistakenly witnessed. I also felt even more loathing towards Leo as that part of the story unfolded.

A Nightingale in Winter grabbed my complete attention from the first page and I found it difficult to put down. I simply loved it and would highly recommend reading it. If you’re a fan of historical fiction, or even romance, give this book a read.

Margaret K Johnson began writing after finishing at Art College to support her career as an artist. Writing quickly replaced painting as her major passion, and these days her canvasses lay neglected in her studio.

She is the author of women’s fiction, stage plays and many original fiction readers in various genres for people learning to speak English.

Margaret also teaches fiction writing and has an MA in Creative Writing (Scriptwriting) from the University of East Anglia. She lives in Norwich, UK with her partner and their bouncy son and dog.

Find out more about Margaret, via her author interview ‘The Writing Life of: Margaret K Johnson’