Go the F**k to Sleep by Adam Mansbach – Book Review

Go the F**k to Sleep by Adam Mansbach – Book Review 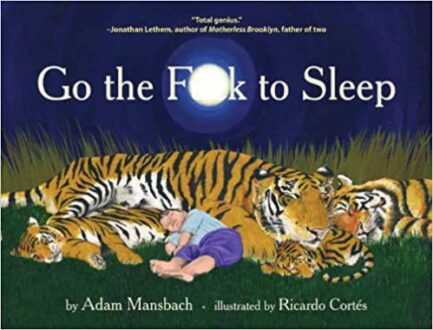 Go the F**k to Sleep

Go the F**k to Sleep is a bedtime book for parents who live in the real world, where a few snoozing kitties and cutesy rhymes don’t always send a toddler sailing off to dreamland. Profane, affectionate and refreshingly honest, it captures the familiar and unspoken tribulations of putting your child to bed for the night. Colourfully illustrated and hilariously funny, this is a breath of fresh air for parents new, old and expectant.*

*(You probably shouldn’t read this to your children.)

If you have children or have ever looked after someone’s young children of a night-time then this book will be perfect for you. I just want to make it clear before I carry on my review that this book is for adults only, definitely not for children.

This is the tale of all the children that won’t go to sleep. It is night-time they have been in bed for ages and still, they are not asleep. They have asked for a drink, something to eat, the toilet. All the usual tricks that children pull when they know they should be going to sleep. And this is a narrator who has had enough and just says what he thinks about getting his child to go the f**k to sleep.

The book is hilarious, as long as you don’t mind a lot of swearing, and boy does this book have a lot. I first read this when it was initially released in 2011 when my kids were a little younger. Now they are teenagers I think I need a book called ‘Wake the F**k Up’ as they certainly like their beds!!

As well as purchasing the book you can also hear it on YouTube narrated by Samuel L Jackson and believe me there is no better actor to read this book, nobody swears like him.

This is a naughty picture book for parents/guardians/babysitters who have had to put up with the dramas from their children and are tired of it. The book is not only an amazing, truthful read but also has some fab artwork too.

Mansbach’s 2013 novel, Rage is Back, was named a Best Book of the Year by NPR and the San Francisco Chronicle and is currently being adapted for the stage; his previous novels include the California Book Award-winning The End of the Jews and the cult classic Angry Black White Boy, taught at more than eighty schools.

Mansbach is the recipient of a Reed Award, a Webby Award, and a Gold Pollie from the American Association of Political Consultants for his 2012 campaign video “Wake The F**k Up,” starring Samuel L. Jackson. He was the 2009-11 New Voices Professor of Fiction at Rutgers University, a 2012 Sundance Screenwriting Lab Fellow and Indian Paintbrush/Sundance Institute Filmwriting Grant recipient, and a 2013 Berkeley Repertory Theater Writing Fellow.

What did you think of Go the F**k to Sleep? Share your thoughts in the comment section below!