Henry and the Hidden Treasure by B.C.R. Fegan – Book Review

Henry and the Hidden Treasure by B.C.R. Fegan – Book Review 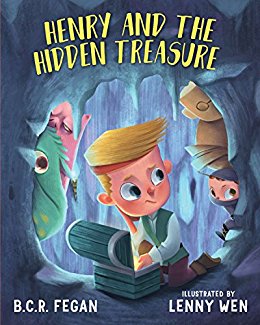 Henry and the Hidden Treasure is an imaginative adventure a young child has in defending his pocket money against his little sister. Henry constructs elaborate defensive measures that he is sure will stand up to the clever ambitions of Lucy. Little does he know, Lucy has a few tricks of her own.

With a focus on introducing children to the use of ordinal numbers, Henry and the Hidden Treasure also draws out some important qualities of being a kid – such as creativity, the value of listening to parental advice, and of course, being nice to your sister.

Henry has a lot of treasure. He wants to keep it hidden from his little sister Lucy, who he believes is really a ninja and is trying to steal it.

His mum and dad want him to put his treasure in the bank, but Henry thinks he knows the perfect place to hide it, where no-one will ever find it.

Henry is a lovely young boy with a very vivid imagination. As a parent, I love that he believes his little sister is really a ninja. He comes up with some great ideas on how to keep his money safe.

The illustrations are superbly drawn, they are bold in colour, amusing, and fit the story perfectly.

I can picture lots of little children doing exactly what Henry did to keep his treasure safe, especially when little children always think they know better than grownups.

Henry and the Hidden Treasure is a brilliantly entertaining book that is enjoyable from beginning to end, and such a sweet ending it is too.

BCR Fegan is an Australian author who has written a number of fairy tales and fantasies for children and young adults.

Raised on a small hobby farm only minutes from some of Australia’s greatest beaches, Fegan grew up inspired by the power of natures ambience. From the intensity of the frequent summer storms, to the overwhelming serenity of a lonely beach in the early hours of the morning. His ravenous appetite for both reading and writing soon saw him drawing on the transformational influence of the world around him to craft short stories, poems and picture books.