How To Be A Human by Karen McCombie – Book Review

How To Be A Human by Karen McCombie – Book Review 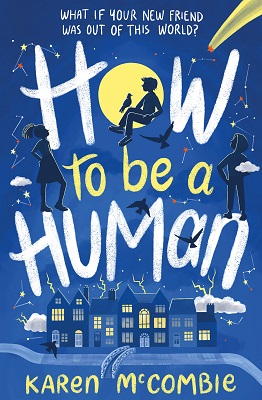 How To Be A Human

How to Be a Human is a warm and otherworldly story about finding friendship in the most unlikely of places from highly acclaimed and much-loved children’s author Karen McCombie.

Kiki has been dumped by the Popular Crew and is feeling the pain of rejection. Wes is a loner and an easy target for the school bullies. Both could use a friend.

The Star Boy is marooned on Earth, awaiting rescue. From the safety of the basement of Fairfield Academy he watches the humans, in particular Kiki and Wes. But soon studying them from afar isn’t enough and, keen to uncover just what it means to be a human, the Star Boy follows them into school and into their lives….

Could the stars have aligned for the most unusual friendship?

How to be a Human is a middle-grade story about a young alien called Star Boy who crash lands on Earth. Whilst awaiting rescue he hides in the basement of Fairfield Academy and watches the pupils and wildlife to see how they behave and act.

Star Boy particularly pays attention to two of the pupils, Kiki who has become the outcast after being thrown out of the in-crowd because they deem her younger brother an embarrassment and that she turned up at a house party dressed as an alien after a misunderstanding, she may also have blocked the toilet at the house party too!!

Wes is the new kid at Fairfield Academy and is a bit of a loner which makes him a target for the class bullies.

How to be a Human is a touching tale of friendship surrounded by a wonderful sci-fi story in which an alien has crash-landed on Earth. Kiki and Wes get to show Star Boy (or Stan as they rename him) around and how humans behave and exist on Earth.

Star Boys love for everything new and exciting to him is fascinating to read about and quite joyful too. He has so much enthusiasm for everything no matter how big or small. It was also lovely to watch these three form a friendship.

The story is told from three points of view, the main characters, so you get an insight into how each of them feels about their situations. This is a very sweet book that is intriguing, exciting, and has a fabulous plot. It is also book one in a new series so children.

Karen McCombie is a bestselling author of children’s and young adult novels, and has had more than 90 books published. She is the author of the much-loved series ‘Ally’s World’ (early 2000s) and her most recent books include the Carnegie-nominated historical adventure ‘Little Bird Flies’ (2019) and it’s newly published partner novel ‘Little Bird Lands’ (2020, Nosy Crow Books), plus the ‘St Grizzle’s School’ series for younger readers (Stripes).

Originally from Scotland, Karen lives in London with her husband, her teenage daughter and beautiful but bitey cat Dizzy.

What did you think of ‘How To Be A Human’? Share your thoughts in the comment section below!