King of the Sky by Nicola Davies – Book Review

King of the Sky by Nicola Davies – Book Review 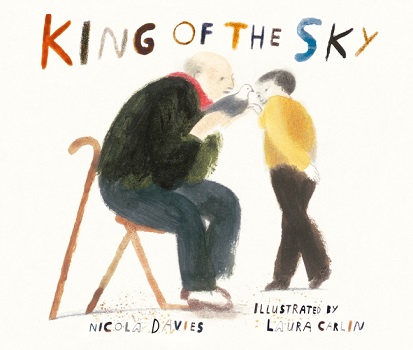 Starting a new life in a new country, a young boy feels lost and alone – until he meets an old man who keeps racing pigeons. Together they pin their hopes on a race across Europe and the special bird they believe can win it: King of the Sky.

Nicola Davies’ beautiful story – an immigrant’s tale with a powerful resonance in our troubled times – is illustrated by an artist who makes the world anew with every picture. A musical adaptation of King of the Sky has already met with success on the stage, shown two years running at the Hay Festival and due to tour Welsh theatres next spring.

King of the Sky, is a beautiful, moving, story that fits this world perfectly, with immigration being high in this country. It teaches children what it feels like to be in a strange country, one you don’t know, or speak the language of.

A little Italian boy moved to the UK with his family. Being far away from the only place he knew, he felt incredibly lonely, he felt that he didn’t belong in the UK. He longed for home.

Behind his house lived elderly Mr Evans, who kept racing pigeons. These were the only things that reminded him of home. He loved seeing them fly, soaring high above the chimney tops.

Mr Evans chose one of his pigeons, and told the little boy that it was going to be a champion racer. He asked him to give it a name. The little boy called him, ‘Re Del Cielo’ – King of the Sky.

This hardcover book touches your heart. It fills you with warmth, a sense of understanding, and a want for the little boys pigeon to win the race.

The artwork is what I would describe as freehand, crayon, childlike drawings. The colours are matt, and quite dark. They are also full page and full of little details.

It is a wonderful book, with a very imaginative, poignant story, One that transports you into the life of a little boy, and his mixed emotions.

I don’t remember a time when I wasn’t fascinated by animals. From the moment I could walk I was out in the garden watching ants and worms, and collecting snails as pets.

I had my first pair of binoculars for my eighth birthday. They were so big, I couldn’t hold them steady for more than a few seconds. I can still remember the very first bird I saw through them: a male blackbird with his golden-yellow eye ring and sooty black feathers.

My first job was studying geese in Scotland, my second was hand rearing jackdaws and my third was watching humpbacked whales from an uninhabited island in Newfoundland! In the last two years I’ve returned to studying animals and have been helping out on a long term study of sperm whales, sailing in the Sea of Cortez, and the Caribbean off the island of Dominica.

I’ve seen all sorts of animals, all over the world: chameleon’s in Madagascar, turtles in the Seychelles, walruses in the Arctic, bat eared foxes in Kenya, salt water crocodiles in Australia. But I still love the animals that are within reach of my home in Wales: the ravens and red kites, the grey seals and the choughs, the roe deer and foxes, even the blackbirds that nest in my tiny garden.