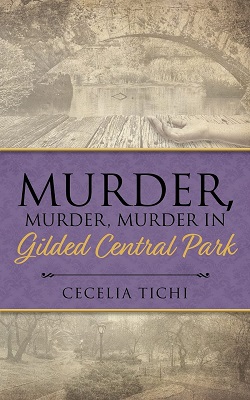 In her Fifth Avenue mansion in autumn, 1898, silver heiress Val DeVere learns a third young woman’s strangled body has been found nearby in New York’s Central Park. The victim could be someone like Val’s late mother—or her—for the Valentine Mackle DeVere is one generation from the Irish immigrants who now risk their lives toiling in the city that promised a better life.

Heartsick, Val joins her well-connected husband, Roddy (Roderick Windham DeVere), to press the mayor for action, but scandal-ridden city hall finds little time for the case of “disposable” young women who frequent the park at night.

A maverick police detective urges the DeVeres to help him find the killer, but his “evidence” ensnares a family friend and could send an innocent man to death row. The couple feel on trial when the detective baits them with Roddy’s Old New York heritage: “Tell me this, Mr. DeVere…how many more murders before you and Mrs. DeVere cooperate to save the park your forefathers built?”

Murder, Murder, Murder in Gilded Central Park is a charming tale set in New York at the end of the nineteenth century. The story revolves around a comparatively newly-wed couple, Val and Roddy DeVere. (Valentine and Roderick)

Val comes from a poor background. She grew up in the Wild West and didn’t have any social niceties until her father struck it rich with a silver mine, and had her educated to be a young lady. Roddy had an East Coast, upper-class upbringing. The pair met and fell in love, his parents, however, were not so enamoured of this unconventional young lady but she did possess the wealth they required for their son.

Roddy has an interest in developing cocktails, and the book is dotted with various cocktail recipes. I cannot make up my mind whether this enhances or detracts from the story as a whole.

The DeVere home in New York is opulent, with servants, and has Central Park on its doorstep. Central Park had seen a couple of murders of young women at night, and other crimes which escalate as the book goes on. As a favour to a family friend, Roddy and Val turn their hand to sleuthing and solving the murders.

The story moves along at a good pace and we meet a stream of interesting characters throughout our journey which has a few surprises installed for us.

I found the references to the history of Central Park very interesting, and this book made me want to visit New York to see it for myself.

Murder, Murder, Murder in Gilded Central Park is a quick and easy read. It is a fantastic historical mystery set in an era I love. It was a very pleasant way to spend a couple of winter afternoons reading.

A native of Steel City, Pittsburgh, Cecelia Tichi is an award-winning author and faculty member at Vanderbilt University. Her books span American literature and culture from colonial days to modern times, but recently draw upon the Gilded Age (1870-1914) that prompted her book on Jack London and another on seven activists in that tumultuous era.

Tichi’s What Would Mrs. Astor Do? A Complete Guide to the Manners and Mores of the Gilded Age (2018) segues to her new mystery series, A Gilded Death, together with Murder, Murder, Murder in Gilded Central Park, and A Fatal Gilded High Note. Cecelia is at work on a fourth historical mystery, “A Fatal Gilded Freefal.” She enjoys membership and posting in Facebook’s The Gilded Age Society.

Cecelia’s books have been reviewed in the New York Times, The Wall Street Journal, Publisher’s Weekly, and elsewhere. Tichi’s five previous mystery novels (under Tishy), set in Nashville and Boston, have been praised by mystery guru Lisa Scottoline as “great reading,” and hailed by Booklist as “a real treat.” She makes her home in Nashville, Tennessee.

What did you think of ‘Murder, Murder, Murder in Gilded Central Park’? Share your thoughts in the comment section below!