Never Have I Ever by Joshilyn Jackson – Book Review

Never Have I Ever by Joshilyn Jackson – Book Review 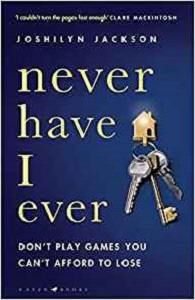 Never Have I Ever

It starts as a game at a book group one night. Never Have I Ever… done something I shouldn’t.

But Amy Whey has done something she shouldn’t. And Roux, the glamorous newcomer to Amy’s suburban neighbourhood, knows exactly what that is.

Roux promises she will go away – if Amy plays by her rules.

But Amy isn’t prepared to lose everything. She’s going to fight back, and in this escalating game of cat and mouse, there can be only one winner.

Never Have I Ever by Joshilyn Jackson completely blew me away!

The plot is a real roller coaster of a ride with all the right elements needed for a psychological thriller. It contained danger, suspense, blackmail, darkness, and depravity. We also get to see what lengths the character Roux is prepared to go to, to get what she wants!

The other main character Any Whey, who’s point of view the book is written from, has a big heart and is very likeable, her past involved a catastrophic accident when she was a teenager which sent her life in a spiral downturn but she turned it around when she learned to sub-aqua dive, which gave her something to focus and change her life.

I just love the different parts of this book, so many different aspects and the ending was a complete surprise that I hadn’t envisaged.

The pace was fast and in places, I felt I couldn’t turn the pages quick enough and it was very hard to put down. There are some very dark passages but it is well written and in the right context and the author covered the hard subjects well.

It certainly had me gripped from page one, I will definitely recommend this book. Well done to the author Joshilyn Jackson for such a brilliant read and I look forward to reading more from her in the future.

New York Times and USA today bestselling novelist Joshilyn Jackson is the author of NEVER HAVE I EVER and eight other books, including gods in Alabama and The Almost Sisters. Her work has been translated into more than a dozen languages, won SIBA’s novel of the year, three times been a #1 Book Sense Pick, been the Target Book Club Pick, and three times been shortlisted for the Townsend prize.

A former actor, Jackson reads the audio versions of her novels; her work in this field has been nominated for the Audie Award, was selected by AudioFile Magazine for their best of the year list, and garnered two Listen Up Awards from Publisher’s Weekly.

She lives in Decatur, Georgia with her family.

What did you think of Never Have I Ever? Share your thoughts in the comment section below!