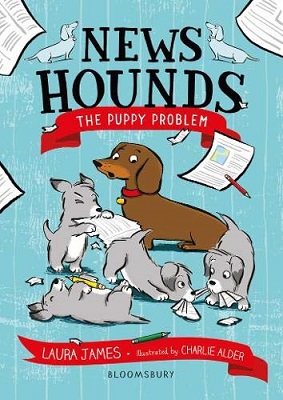 Gizmo is a city dog, so when he moves to the village of Puddle with his journalist human he doesn’t know WHAT to expect. Certainly not FLOWERS. Or BEES. And he couldn’t have even imagined MUD. Luckily he’s got Jilly, the wolfhound next door, to show him around. But Jilly has a problem. Her puppies are going to be given to new owners far away. She’ll never see them again! Gizmo might not know the difference between a cow and a tractor but he’s got a nose for a story, and a great idea to help Jilly. What if the dogs of Puddle had a newspaper? STOP PRESS!

A charming and hilarious new illustrated young fiction series about the things dogs get up to when their humans aren’t looking, from the author of The Adventures of Pug series. Perfect for fans of Toto the Ninja Cat and The Secret Life of Pets.

Gizmo the Dachshund lived with his owner in the city until she decided to move to a small country village called Puddle, taking Gizmo with her. Gizmo wasn’t used to country life and was shocked to meet his new neighbour, a huge dog called Jilly. Jilly was an Irish Wolfhound and she had four puppies.

Jilly learns that her owners are going to sell the puppies but she doesn’t want them to leave the village, so Gizmo comes up with a plan. He writes a newspaper article for the dogs of the village and gets them to bring their owners to Jilly’s house where hopefully some will love the puppies so much they will want to keep them.

What an amazing start to what I can already tell is going to be a fun and exciting new series from author Laura James. Gizmo is so adorable, I mean who doesn’t love a Sausage Dog, he is very clever too, especially with his owner being a newspaper editor.

The idea that a group of dogs from a village can wander around freely, chat with one another, and come up with plans to write newspapers for all the local dogs to read is certainly imaginative and I can see children being amazed and in love with the idea.

This is a beautiful book that will keep children entertained and engrossed in the story. It has been highly illustrated with wonderful images that bring the dogs and their antics to life. I now can’t wait for more books in the series to be released.

Laura James’s love of storytelling began at an early age and led her to undertake a degree in Film Studies at the University of Kent and an MA in Writing for Young People at Bath Spa University. Laura’s debut novel Captain Pug, part of her Adventures of Pug series, was shortlisted for the Waterstones Children’s Book Prize in 2017. She also writes about Fabio: The World’s Greatest Flamingo Detective and some dogs who start a newspaper in News Hounds. Laura’s books are published by Bloomsbury and sell around the world. She lives in Dorset with her two wire-haired dachshunds, Brian and Florence.