The Queen of England by Courtney Brandt – Book Review

The Queen of England by Courtney Brandt – Book Review 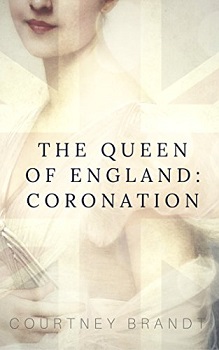 The Queen of England
Book One: Coronation

A story of growing up and leading a nation.

With Victoria and much of the aristocracy killed in a horrible dirigible accident in 1840, recently crowned eighteen-year-old Queen Juliette must balance fighting a shadowy terrorist organization, the hunt for Excalibur, and an undeniable attraction to the Captain of her Guard before she fully assumes the throne.

This lighthearted steampunk adventure also features a handsome foreign prince, a gifted unicorn, and an alternate history you won’t want to miss. Will Juliette’s reign be over before it has a chance to begin? Download the novel to find out!

Fans of Gail Carriger, Shanna Swendson, and Colleen Gleason won’t want to miss out on this exciting book.

Juliette Rosamund was crowned Queen of England after the May massacre that claimed the life of the Queen and other members of the royal family. She was only 18 when she was given the responsibility of governing a kingdom as great as the United Kingdom.

Along the line, Juliette Rosamund comes face to face with her political enemies, she also has to battle with her emotions and manage to keep a clear head for her people. What will become of her? Will she lose herself to her political and emotional enemies?

The Queen of England is a very interesting book with wonderful characters that fit perfectly into their role. My favourite character was the Queen of England, I love her bravery, intelligence, poise and grace. I also fell in love with the Captain of the Queen’s guard, the handsome Prince Estevan and the talking unicorn.

This book gave me an insight into the lives of those in power. I got to see the challenges some of them go through and the difficult decisions most of them have to make. This made me understand the saying “uneasy lies the head that wears the crown”. This book is captivating, I love the way events happen on a fast pace. I look forward to reading the other parts of this trilogy.

Ms. Brandt is proud to present The Line, and the additional novels in the complete series, A Fine Line, Keeping in Line, and The Line Up (available individually, or as a complete Anthology). Each of the lighthearted novels was created for high school students and alumni in marching band. As a former drumline member, Courtney enjoys bringing a fictional voice to band geeks all over the world and is patiently waiting for Hollywood to wake up and realize her books would make great (and financially successful) films or television series!

Courtney was proud to announce the release of her next book, Confessions of A Teenage Band Geek in Fall 2011 and her final YA marching novel, Major Pain, in the fall of 2012. She also is the sole manager of the successful Tumblr ‘marchingartsphotography’ account.