Love Give Us One Death by Jeff P Jones – Book Review

Love Give Us One Death by Jeff P Jones – Book Review 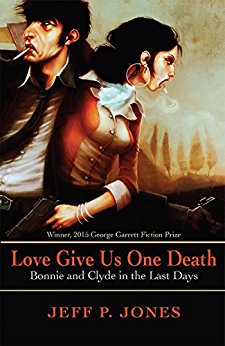 Bonnie and Clyde are the most famous outlaw pair in American history, children of the Dust Bowl, illicit lovers whose criminal run inspired fear and admiration in a country desperate for antiheroes.

Their bloody path, spooking outward from their family homes in Dallas, ranged across the Southwest, the desiccated southern plains, and the Midwest.

Frank Hamer, the legendary Texas Ranger, was hired to stop them. The story of their death on a lonely Louisiana back road, as well as their short life together, is a story of a nation reaping the results of environmental degradation, injustice, and greed.

The story of Bonnie and Clyde has become the stuff of legends and in his debut novel, American author Jeff P Jones has given us his version, part fact and part fiction, of this tale.

This book is presented as a documentary style account of their meeting and subsequent life together, through snapshots and fragments. These are interspersed with testimonies from various contemporary commentators. There are also some of Bonnie’s poems which add a contrast to some of the bleaker content.

It took me a while to get into the rhythm of the tale as the timeline moved between highlights of the couple’s life together and events as they unfolded on the day of their death. I also struggled a little with large sections of prose which were often broken up by no more than a paragraph or two on the page. Whilst the content was interesting, the presentation was daunting. At other times, there were only a few words on the page; possibly to emphasise the importance of the information and maximise its impact.

I particularly appreciated the author’s gritty descriptions of life in poverty stricken Dallas of the 1920s/30s. He often wrote in the third person but occasionally in the first, with a few sections in play script or court record format. It is therefore very difficult to pigeonhole his style but I suspect that is exactly the intention.

Jones has employed a variety of literary mechanisms. One of which is worthy of particular note. It is well documented that Bonnie suffered a catastrophic injury to her left leg during a car accident. In the immediate aftermath, Jones talked of ‘the leg’ when referring to Bonnie. This was an excellent way of getting across the severity of the situation and I admire him for his ingenious use of metonymy.

Jones has a very balanced view of the couple. Not shrinking away from their crimes but at the same time showing a degree of sympathy for them. He compares Clyde to a latter day Robin Hood and gives us insights into his polarised personality. He strips away the glamour and shows us what life was probably like during their hand-to-mouth existence with foreshadowing of the inevitable conclusion to the story.

We also have a glimpse of Bonnie’s humdrum existence filled with boredom before she met Clyde. She craved excitement and adventure but what she ended up with was a life devoid of moral compass. In spite of this, Jones allows us to see her sensitive side as she grieves for her niece and nephew and we are also given a tantalising piece of information which only an exhumation could verify.

It is clear that no one will ever know the full story but Jones gives us a plausible account of the lives of two misfits who met, fell in love and ultimately died together in a maelstrom of bullets.

I struggled at first with this book but I’m glad I stuck with it, as it’s a thought-provoking and at times disturbing read. It was rather too clever for me in places and as such, I’m not totally sure I fully appreciated all its nuances but I did find it fascinating and accordingly, I award four and a half stars.

He’s a MacDowell Fellow, and his writing has won a Pushcart Prize, as well as the George Garrett Fiction, Meridian Editors’, A. David Schwartz, Wabash, and Lamar York Nonfiction prizes.

He lives on the Palouse in Idaho. LOVE GIVE US ONE DEATH: Bonnie and Clyde in the Last Days is his first book.