Today on the blog we welcome author Lee Jenkins, with his guest post ‘Thoughts about Right of Passage‘ as part of the blog tour for his new book ‘Right of Passage’ which was released on 26th July 2018.

Thoughts about the Novel – Right of Passage

You could think of Right of Passage as autobiographical in many respects. It traces the development of the main character, Chris, in a way that reflects the actual events of my own life. I refer to actual events, but I have elaborated, expanded and re-imagined them in such a way that many bear little resemblance to what actually happened. It is a merging of memory and expanded imagining. I think such a procedure is often the case in fiction writing. A whole world is created that might be based on what we actually experienced but is true only according to the possibilities of what we feel is actually or humanly possible. A creative writer shows us what is possible though we may not have actually experienced it, just as a composer sounds depths of feeling that we may not personally recall having experienced but which prevail upon us now to recognize as real and part of our emotional repertoire.

Then, of course, we could use fiction to correct or change actual events to bring them more in line with a more compelling version of what we would have wanted them to be; or we make clear how a situation could be seen or interpreted differently from how it was perceived at the time it occurred.

The character Chris has some resemblance to me but is still a creation independently conceived with a unique interior life of his own. He comes to have an integrity of his own that only allows for actions and thoughts that are consistent with the nature of his own being. What you see then is his life, not mine, just as David Copperfield’s life is his own, not Charles Dickens’s.

The same can be said for the character Miriam. She is based on a woman I knew 50 years ago with whom I had a relationship. If she read the novel she might recognize some details and occurrences in it. I don’t think she’d recognize the image of the character that emerged out of my conception of her and the events in the life that we shared. All this has been imagined and transformed into something else. Still she might think that what she sees is the realization of a possibility that might have been in the making for us. So much of what happens is invention, things that never actually happened but certainly could have happened; and now the novelist says that they actually did happen. Perhaps the imagined is what happened if one says that it did—a situation similar to what happens in real life when it’s difficult to distinguish in one’s own mind between what “actually” happened and one’s memory of what happened.

The multiple sources of the experiences impacting a novelist’s life that feed his imagination are myriad. This is the material out of which one invents.  It is deeper than conscious thought and redolent with unconscious life, all the pain, anguish, hopes, fears and determinations that feed our dreams and animate our conceptions of who we are and how things ought to be; or how we might fight against what limits us; or how we come to grips with a lived conception of the compromising thing we accept that limits our potential, because we lack the strength or courage to do otherwise, or because we have learned to be comfortable with a secondary version of ourselves.

A recognition of the interacting nature of these conflicting visions of oneself and of life is the ongoing experience of African Americans. This inheritance is what I write about in the novel.

Set in the heyday of the 1960s Civil Rights Movement and Vietnam War era, Right of Passage explores the social change and conflict involved in that period. The emotional development of Chris, a middle-class black man, is explored-being black in white society, conflicting cultural allegiances and the contradictions of his inner life.

Chris meets Miriam, a white fellow academic, an irresistible mutual attraction complicated by fear and self-doubt, and the resistance of their families. Against a background of racial conflict, interwoven with day-to-day scenes of black middle-class life, this is a picture of the inexplicable and transforming power of love, and the irony, humor, and pain involved in measuring up to self-professed humane ideals.

Lee Jenkins is a psychoanalyst in private practice and a professor emeritus at John Jay College of Criminal Justice, CUNY. He received his PhD in English and Comparative Literature from Columbia University and his psychoanalytic training at the National Psychological Association for Psychoanalysis (NPAP).

He is currently a supervisor and training analyst at NPAP and other psychoanalytic institutes. He has written on literature, psychology and race relations and is a published poet.

You can find out more about Lee Jenkins by visiting the website site below. 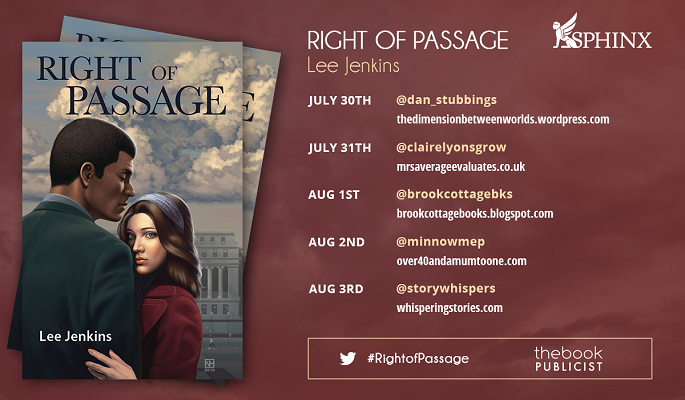