The World is Never Enough by Sarah Donohue – Book Review

The World is Never Enough by Sarah Donohue – Book Review 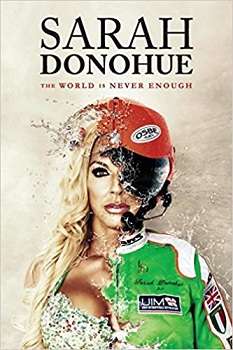 The World is Never Enough

This is the action packed story of a female racing driver and stuntwoman who lives life on the edge and enjoys every extreme moment of it… A thrill-seeker by day and glamorous showgirl by night, Sarah Donohue believes in living out her dreams and living life to the full bringing colour and laughter to the lives of everyone around her.

Even after a high-speed powerboat crash putting her on a life-support machine, Sarah didn’t let dying for four minutes or a face held together by titanium plates dampen her spirits. The crash was documented as one of the worst crashes seen in powerboat racing history yet Sarah returned back to racing with BBC’s ‘999’ and ‘Ripley’s Believe It or Not’ hiring her as the stuntwoman to re-enact her own near fatal experience. Soon after she became the European powerboat champion. Her journey of triumph over adversity is both inspiring and extreme.

This story of life will take the reader through a roller coaster of emotions as Sarah experiences the highest of highs on podium tops to the lowest of lows as she suffers jealous cyber abusers. The funny stories recalled as a forces pinup and staunch supporter of the military through to the not so funny story of Sarah enduring Donald Trump, the now president of the United States of America and his legal team for almost four years.

This feisty girl from Yorkshire loves life and puts as much into it as she can whilst taking anything it throws back at her remaining positive and up beat. This shows that even the impossible can be made possible with the right attitude no matter who you are or where you come from. A motivational, funny and inspirational book showing one woman’s journey on taking on any challenge head to head and her world-renowned success in the male dominated sport of offshore powerboat racing. Even death becomes her.

Sarah Donohue has had a varied and quite frankly an exciting life. From a young age, she wanted to be a TV presenter. She attended the Oldham Theatre Workshop from age eleven, rubbing shoulders with those from Coronation Street and Mark Owen (Take That).

In her early twenties she moved to London looking to get her big break and turned to dance, from there she travelled the world, even having a stint at the Moulin Rouge in Paris. It wasn’t until she met her friend Charles Burnett III that she got into motorboats and racing became a passion.

It was whilst at the European Offshore Powerboat Championships in Venice, Italy, that she nearly lost her life. Sarah describes how she had a funny feeling that something would go wrong, even telling her team manager to contact her friend not her mum or dad if something serious happened. Not long into her race, her fears came true. The next thing she remembers is waking up in what Italy call their intensive care, the reanimation rooms. She had suffered broken bones in her wrist, arm, shoulder, collarbone, and ribs. She had also smashed her face pretty badly too, including a fractured skull and lost most of her teeth.

Even staring death in the face didn’t stop her getting back out on the water. Follow Sarah’s remarkable journey in the book she had always wanted to write.

I have to say that I’m not usually one from reading biographies, I often find them boring or a bit biased as people gloss over the bad bits of their life (or glamorise them). However, it was refreshing to read Sarah’s account of her life. She tells you exactly how it was, no holds barred and plenty of swearing to go around too. This is a woman who isn’t afraid to dish the dirt on some big companies and even her legal fight with Donald Trump.

I was intrigued and enthralled by Sarah’s life story. I also felt an overwhelming sense of pride for a woman determined to keep going no matter what life threw at her. Her life has been hectic, just as she likes it to be by the sound of it. This is a superb book written in an easy, casual manner that had great chapter titles and was pure enjoyment to read.

Born and raised in  Saddleworth, Yorkshire born Sarah Donohue has enjoyed over twenty five years competing as a powerboat racer, and is currently the most successful female competitor within the sport. She’ll be returning to race again this year in the US and Hong Kong as the face of the Asia Powerboat Series.

As well as racing, Sarah is a qualified personal trainer, international Tri-Fitness champion and, between the years of 2011-2017, created and ran the annual Miss Galaxy Universe fitness competitions in the UK. 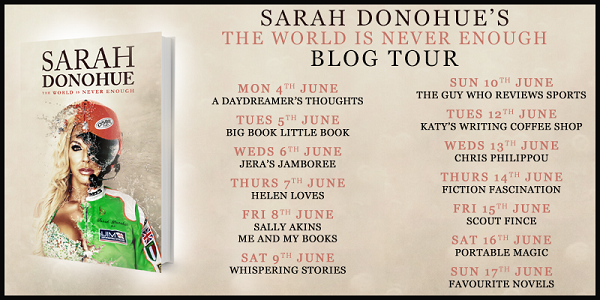