A Sad Summer in Biarritz by Jill Culiner – Book Review

A Sad Summer in Biarritz by Jill Culiner – Book Review 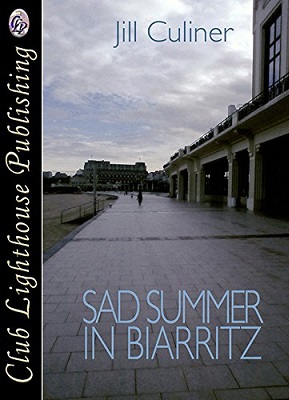 A Sad Summer in Biarritz

I have now started my new life with its positive dynamic; by recording all details, I’ll see a pattern emerge. One day — perhaps in the very near future — I’ll peruse these notes with pleasure. One day. When I’m secure in love, in my own home, in happiness.

The narrator, a Canadian woman, hopes to change her life by moving to Biarritz. Having escaped a devastating relationship with the mentally unstable Dominique, she is determined to make new friends and find the perfect mate. But in this summer resort frequented by couples and families, available singles are lonely people, too often embittered by romantic failure. And if the young artist Vinnie has promised entry into local society, he remains an illusive figure.

When Vinnie’s body surfaces at the Pointe des Fous new rumours circulate. Had he really been a fortune hunter, a seducer and blackmailer, or just a gentle, over-sensitive man, a loser in love and friendship? The police have concluded his death was accidental, but doesn’t everything point to murder? Or is the narrator over-reacting? Perhaps loneliness and isolation have made her suspicious, for love is as unattainable as ever, and threatening letters from Dominique are arriving with increasing frequency.

Sad Summer in Biarritz, is a mystery, a story of the desperately lonely search for love, and a satirical portrait of French nouveau riche society in the 1980s.

The protagonist and narrator of this book is a woman from Canada. She is determined to find her real love after breaking up with her Ex Dominique, who is described as mentally unbalanced and a stalker. Before her photo show up north, the woman moves to Biarritz for a period of five months.

On her way there on the train she meets Vinnie, an artist, who is bound to Biarritz too where he has to “set something right” and he tells her about a gallery he knows well. After arriving in Biarritz, living in an apartment owned by Dominique’s aunt, the narrator wants to find Vinnie and therefore goes to look for the gallery, where she gets to know the owners Chantal and Micheline. They claim to never have heard from Vinnie and strangely, he is nowhere to be found.

The Canadian woman though is determined to find out more about Vinnie and why everyone seems to change subject every time his name is mentioned. She also has to cope with her Ex-boyfriend contacting her on a regular basis.

Honestly, I had some difficulties finding my way into the story. It took me some time to get used to the different language and style of the writing. Nevertheless, I did warm to it, and was quite hooked by the plot, although unfortunately it did have some weak points.

I found it kind of interesting that the name of the Canadian woman is never mentioned. But that’s possibly why I didn’t connect with her the way I would have liked. I felt somehow at a distant to the characters.

The friendship with Chantal and Micheline, if one can even call it that, is irritating and I didn’t really understand them. On the other hand, Chantal is entertaining in a way. The narrator is a very serious character, which given the title is appropriate for the book.

The story I did like, I just didn’t really connect with the characters, or that of the narrator of A Sad Summer in Biarritz. I rate it with an honest 3 stars.

Born in New York, raised in Toronto, Jill Culiner has lived in England, Holland, Greece, Turkey, Germany and Hungary, keeping body and soul together by delivering newspapers, belly dancing, translating, tour guiding and a great many other tedious jobs. She presently resides in a small French village, similar to the not very pleasant one presented in her mystery, Slanderous Tongue.

For her non-fiction work, Finding Home in the Footsteps of the Jewish Fusgeyers, she crossed Romania on foot tracing the path of immigrants bound for North America at the end of the 19th century. The book won the Tannenbaum Prize for Canadian Jewish History in 2005 and was short-listed for the ForeWord magazine prize.

As a photographer, her exhibition concerning the First and Second World Wars, La Mémoire Effacée, has toured France, Canada and Hungary under the auspices of UNESCO and the French Ministry of Foreign Affairs. As an artist/creator of social critical objects, her work has been exhibited throughout France and Germany, in Spain, England, Switzerland and Poland. It now fills La Boule d’Or, a former café/hotel transformed into a peculiar mini museum open to the public. Its wild garden (much to the distress of close neighbours) is a reserve for birds, butterflies, insects and reptiles.

She has spoken to genealogical and historical groups throughout the United States and Canada, has worked as a broadcaster for Radio France. An amateur musician (flute, piccolo, oboe, oboe d’amore, English horn) she plays in several orchestras and chamber groups.