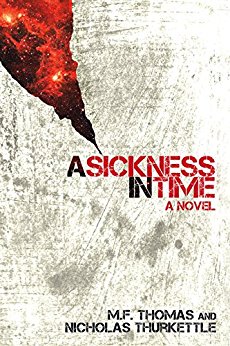 THE MOST DANGEROUS OPERATION

In 2038, the human race is in a death spiral, and most people do not even know it yet. Technology that was supposed to make us better and stronger instead is birthing a strange and terrible plague we may not be able to stop. When the young daughter of Josh Scribner, a wealthy tech entrepreneur, starts to succumb to the illness, he dedicates his fortune in a desperate effort to save her life.

Working with a friend & celebrated physicist, Josh develops the ability to send objects back through time. Their goal to recruit an agent in the past who might change our fatal path.

In our present day, a broken and traumatized Air Force veteran finds a strange message in the woods, drawing her into an adventure spanning decades. All humanity is at stake, as she and her small group of friends become the unlikely heroes taking up the secret fight against our future doom.

A Sickness in Time is a complex tale of future technology, viruses (computer and human) and an original form of time travel. I loved it!

The technological arguments were innovative and at times hard to follow but there were plenty of events that were very believable. I particularly liked the intermingling of electronic reasoning with human thought and the resulting mix of computer and human viruses. We also had the usual mind boggling situations where actions across time could affect past events.

For me the relationship between author and reader is personal so I am always a bit wary of novels written by two people. I don’t know how the task was shared on this occasion but the arrangement worked.

The characters were convincing and I enjoyed the story of the mature Josh doing his best to make good the evil that his inventions had unwittingly created. However, for me the real relationship of the book was that between Maria and Lia, their support for each other, their dependence on each other, and their undeniable yet unspoken love for one another.

Most of the storylines came together at the end with a few nice little twists. I am not sure if all loose ends were tied but, time permitting, I would willingly read the book again to check.

MF Thomas and Nicholas Thurkettle have produced a fascinating science fiction story and I am pleased to give it five stars.

Nicholas Thurkettle – is a writer of screenplays, stage plays, and books, and an actor on stage, camera, and audio-wave. Born in Los Gatos, California, he grew up in the suburbs of Cincinnati, Ohio, turned teenage in Huntington Beach, California, and studied at Bradley University in Peoria, Illinois, where he earned B.A. degrees in Theatre Performance and Music.

He has worked, among many other jobs, as a feature film story executive, a limousine driver, a film critic, a luggage salesman, a teacher of screenwriting, a professional smeller for a Sanitation Department, and something called a “data migration project supervisor.”

He is a proud member of the Writers Guild of America and the Orange County Playwrights Alliance, an Artistic Associate with Shakespeare Orange County, and a producer/writer/performer with the award-winning audio drama podcast Earbud Theater. He currently lives in Southern California.

MF Thomas – has lived and worked in over 20 countries. He is very happy to be home in the United States. With Nicholas Thurkettle, he co-authored the sci-fi thriller novels Seeing by Moonlight, published in Autumn 2013, and A Sickness in Time, published in summer 2016.