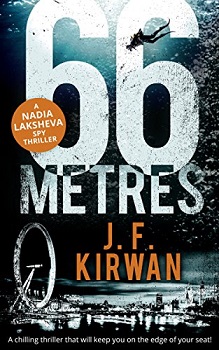 The only thing worth killing for is family.

Everyone said she had her father’s eyes. A killer’s eyes. Nadia knew that on the bitterly cold streets of Moscow, she could never escape her past – but in just a few days, she would finally be free.

Bound to work for Kadinsky for five years, she has just one last mission to complete. Yet when she is instructed to capture The Rose, a military weapon shrouded in secrecy, Nadia finds herself trapped in a deadly game of global espionage.

As daft as it might seem, I actually read book two, 37 Hours, and book three, 88° North, before I got around to reading this book, so it was nice to be able to see exactly where Nadia’s story began.

When she was just a little girl Nadia Laksheva watched as men burst into her home and dragged her father out, he was never seen again. She spent years feeling guilty, believing that she could of helped him. Her relationship with her mother was fraught, and so on the day she turned 18 Nadia packed up her belongings and headed to where her older sister Katya lived, much to the disapproval of her mother who warned her she would become a killer like her father, or a prostitute like her sister.

A lapse in judgement was her downfall, and the beginning of a life she never wanted to lead. She was arrested and sentenced to 12 years in prison for a crime she didn’t commit. Luckily, or unluckily for her, Katya managed to pull some strings and get her released.

Unfortunately, it would seem that Katya had made a bargain with Russian mobster Kadinsky, who realised how big an asset Nadia could be for him. She was to work for him for five years, complete 10 dangerous missions, and then the pair of them would be free to live their own lives.

After the prologue, chapter one opens up five years later and Nadia is on her final job in London, but this one if far tougher than the rest. She knows that Katya and her life depends on completing this task, but there are people out to double cross Kadinsky, and that means double crossing her too.

The mission was to get the ‘Rose’, but when it ends up 66 metres under the ocean, Nadia needs to work out fast how she is going to retrieve it, and who she can trust to help her. Fail this mission and her sister will be killed.

66 Metres is a fast paced, edgy novel set in the criminal underworld of the Russia Mafia. The book has great characters on both sides of good and evil, including the protagonist of the trilogy, Nadia, who is one kick arse female.

Having read the other two books in the series I kind of knew where this book was heading, but even I was surprised at some of the directions it took. There are plenty of twists and turns to keep you on your toes. There is so much happening all the time and the plot is certainly intense.

The book is totally addictive, and if you love thrillers, then this is a series not to miss.