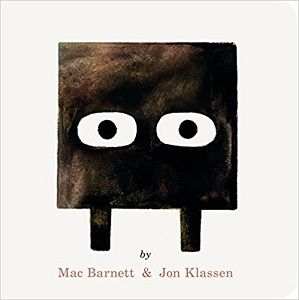 Every day, Square brings a block out of his cave and pushes it up a steep hill. This is his work. When Circle floats by, she declares Square a genius, a sculptor! “This is a wonderful statue,” she says. “It looks just like you!” But now Circle wants a sculpture of her own, a circle! Will the genius manage to create one? Even accidentally?

Last year I reviewed ‘Triangle‘ by Mac Barnett and Illustrated by Jon Klassen. This is their second book in what is going to be a trilogy of books about different shapes.

This book follows Square who lives in a secret cave. Every day he goes to the bottom of his cave, chooses a square of rock and carries it outside of his cave. One day whilst doing this, Circle rolls past. She thinks that Square has made the square rocks to look like himself and wants him to make one just like her. Square isn’t a sculptor though and now he must try and make a circle for his friend, but he doesn’t know how too. What will he do?

I’m a fan of the artwork by Jon Klassen. I understand some people are not keen on the blandness and darkness of his work, but I find it really intriguing and visually pleasing.

The story of Square trying to do something he is not sure how to, just to please his friend is really quite sweet. It is a short book, with only a few words on each page. This makes it a great book for those learning to read.

Square in an interesting book, I can’t wait to see which shape Mac and Jon choose for their next book.

Mac is a New York Times bestselling author of more than 24 books for children, including two Caldecott-Honor-winning collaborations with Jon Klassen: Sam & Dave Dig a Hole, which also won the E.B White Read-Aloud Award, and Extra Yarn, which won both the Boston Globe-Horn Book Award and the E.B. White Read-Aloud Award.

His picture books Leo: A Ghost Story and The Skunk, illustrated by Patrick McDonnell, were named two of the Ten Best Illustrated Books of 2015 by The New York Times. Mac writes the Brixton Brothers series of mystery novels and, with Jory John, The Terrible Two series. He lives in Berkeley.