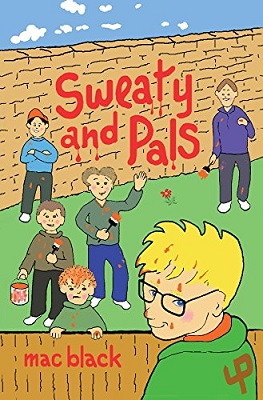 Derek hated his nickname and now we find out how he came by it. Filled with stories about Derek’s exploits with his gang in the eighties, with quirky illustrations (by Mac Black), the stories build on Derek’s ability to find disasters and get himself into one mess after another.

Sweaty’s tales are about little kids enjoying life, before smartphones and computer games came along. Of course, it is just possible – if you are older than five – that you did all these things yourself…

‘Sweaty and Pals’, is the prequel to a series of books by Mac Black called ‘Derek’. The main character in those books, as you would of already guessed, is called Derek, nicknamed Sweaty by his friends, but not for the reason you may think.

The story is about how Derek came to be called Sweaty and about his time as a youngster (well younger than the series), and is set in the 1980’s, a time before gaming machines, smartphones and home computers. If you wanted to have fun then you had to make it yourself.

Each chapter is dedicated to an event that occurred in Derek’s life; most are quite short too. The illustrations that are throughout the book are creatively drawn and bold in colour, aiding to the imagination of kids whilst they read.

The book is told in the first person by Derek and reads quite like a biography, come story. Part of me did wonder whether Mac Black was writing about his own childhood, especially as I can personally remember the 80’s, though not as much as the 90’s, and his descriptions of events were bang on for that era.

Whilst the book is a great addition to the series and those that have read the series, or are reading it, will love this book, I personally found that it dragged on a bit, and I know it’s for children, but I didn’t take to Sweaty (Derek), which made it quite hard to read. I also passed it on to my 12 year old son, who, after 3/4 chapters gave up.

It is an interesting read and hopefully children will enjoy discovering about how life used to be and how privileged they now are. Also, I hope it gives them some ideas for having fun, without electronics.