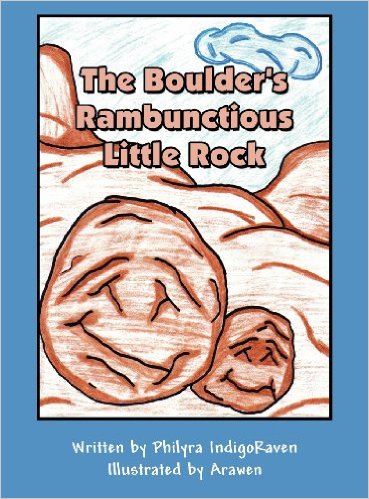 Though born in the North, she quickly grows tired of the slower pace of the other grounded rocks there and heads to the East, South and West in search of adventure and new friends. Finding all that and more, she enjoys herself in the new locations, but ultimately misses her home.

It could perhaps best be described as an anthropomorphic and optimistic tale, and, as it=s a picture book, many younger children should be able to get the gist of the story even without being able to read the words. Appropriate for ages 3 and up.”

This story is quite unusual, but has a hard-hitting message in it about having a place to call ‘home’.

The book is about a little rock named Athena (named after a goddess), who after springing forward from the forehead of her father, travels the land, far and wide having adventures, meeting lots of people and seeing new sights around the world. All wonderful, though she quickly realises that there is ‘no place like home’ and that she misses her family.

The book is written in a rhyme, which children will love, and the pictures are very colourful and roughly drawn, I presume to make them look like a child had drawn them, which will help the children feel a connection to the book.

It teaches them about the elements, as Athena visits lots of different places, such as the volcanic south and the cool waters of the west.

My only small criticism is that the wording in my opinion, doesn’t match the age group. The book is aimed at children aged 5-7 years, but on asking a few children about the word ‘Rambunctious’ none had ever heard of it, and none could actually pronounce it properly.

‘The Boulder’s Rambunctious Little Rock’ is a fun, yet educational book, that will hopefully inspire kids to learn about new places and elements that exist around the world.