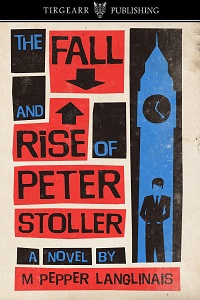 In 1960’s London, British Intelligence agent Peter Stoller is next in line to run the Agency—until he falls in love with cab driver, Charles, and his life goes off the road.

When Charles is accused of treason, Peter is guilty by association. Peter manages to extract them both, but the seeds of doubt have been planted, putting Peter’s mind and heart at war.

This novel by M Pepper Langlinais is set in London during the 1960s. It is interesting combination of a love story and the machinations and intrigue which appeared to be rife within the UK’s security services during this time.

The main protagonists are British and the story unfolds through the eyes of Peter Stoller, an intelligence agent. The plot takes us from England to Eastern Europe and is interspersed with recollections from his recruitment and training nearly twenty years earlier.