The Writing Life of: Elaine Spires

This week I am thrilled to be interviewing author Elaine Spires. Elaine will be sharing with us details of her writing life, telling us all about her new book ‘A Village in the Country‘, which was released on 3rd August 2021, and answering a few fun questions too. This post contains affiliate links. 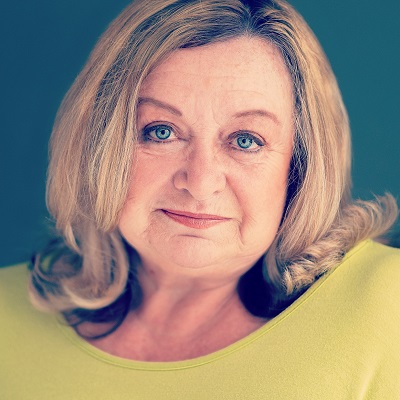 I did, very much so. My mum always read to me and my dad taught me to read before I started school. I loved “losing myself” in a book.

Enid Blyton. Who else? I used to devour her books. My sister and I would go over the park to “have an adventure” (whatever that was! LOL) the way the Secret Seven and Famous Five always did. Then as I got a bit older I loved the Malory Towers books. I wanted to go to boarding school and play lacrosse – I didn’t have any idea what it was.

I’ve struggled with food my whole adult life – sugar has always been my drug of choice. Society is very unforgiving of overeaters and fat people. I think most diets don’t work in the long run because people don’t address the reasons why they eat in the first place.

I used to go to the Anna Scher Theatre and Anna always encouraged us to write plays. So I wrote What’s Eating Me, a play about an overeater called Eileen. It was performed in London and then I took it to the Edinburgh Fringe where it was well received so I decided to turn it into a book – also entitled What’s Eating Me.

I’m a real pantser. I have a story arc in my head but find that very often the characters take over. Sometimes nobody is more surprised than me at where a story suddenly leads or when a character goes off at a tangent.

I don’t have an average writing day. When I lived in Antigua I’d get up early and write while it was cool. That’s me on the veranda of my house Avocado Cottage in the photo. I loved writing there. Nowadays, it’s as and when the mood takes me. I followed quite an erratic writing timetable during lockdown. Some days eight straight hours writing, others an hour in the afternoon, or perhaps nothing. 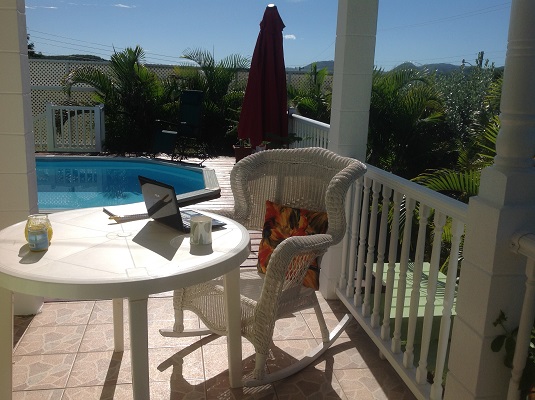 Where Elaine Spires Wrote in Antigua

For me it’s the satisfaction I get when a reader takes the time to get in touch and tell me how much they’ve enjoyed one of my books. That happened quite a bit with The Banjo Books One and Two, which were set in Dagenham 1950-2020. Loads of people remembered those years in the town and wrote to say how much they enjoyed a trip down Memory Lane. And again with the Singles Series from those who had been on various singles’ holidays. That was so good to read. 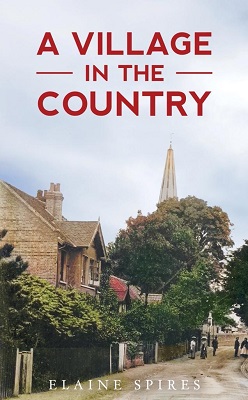 Change is in the air.

It’s November 1918 and the whole nation comes together to give thanks for the end of a bloody world war that has left few families unscathed. More than seven hundred thousand men have perished; those fortunate enough to return are mere shadows of the men who left. Women who have kept the country going by working in munitions factories and picking fruit and vegetables on farms and in market gardens are expected to give up their jobs to the men returning home. In the peaceful Essex village of Dagenham Milly Brightwell is among the women who are not happy at having to take a step back in peacetime as she dreams and makes plans of becoming her own boss.

But just as life returns to post-war normal, the London County Council announces its plans to build more than twenty-five thousand Homes for Heroes on the farmland and countryside surrounding Dagenham. Within the space of ten years the population will rocket to a hundred thousand people and the quiet country village will morph into the largest housing estate in Europe. For the families in Dagenham Village looking forward to better times in the 1920s, life will never be the same again.

My latest book – A Village in the Country – is set in Dagenham in the 1920s. The London Borough of Barking and Dagenham Archive at Valence House Museum was a priceless resource. The Borough Archivist Karen Rushton and her team are extremely helpful. The cover photo on the book, of Crown Street Dagenham in the early 1900s, is from their collection and used by kind permission. I also use Google, of course. I like to research even small details well and sometimes it’s a slow process.

With A Village in the Country it was about 18 months. I knew this year was the Centenary of the Becontree Estate which turned Dagenham from a village in the country into the largest council estate in the UK and thought it fitting to write the book for release now.

Well, most of my books are contemporary fiction/romcom. The Banjo Books and A Village in the Country are historical fiction/sagas. I have always been very proud of being a Dagenham Girl and wanted to write about my fabulous childhood growing up there – and as I’m old they had to be historical fiction! And then, of course, wanting to tell the story of the village of a hundred years ago made this book historical fiction, too.

I always Google the most popular names for the years my characters were born and then choose names that I think fit them. For example, Milly Brightwell is one of the three lead females in a Village in the Country and I thought Brightwell was a pleasant surname, suggestive of her go-ahead character and Milly seemed to fit it. I have to add I also liked Milly Molly Mandy as a child so perhaps choosing Milly came from there?

Milly Brightwell is working in a munitions factory just outside Dagenham Village. She’s 23, unmarried, intelligent and smart and wants more than just being a stand-in until the men come back. When the war is over she goes back to fruit picking but an idea she has for a shop just won’t go away.

Maudie Page’s husband Jim perished at Passchaendale leaving her with four children. She and the three older children are fruit and vegetable pickers at Mr Williams’s market garden, working hard to keep their heads above water.

Elsie Woods is left running the family’s rag and bone business during the war. Her husband Clive and oldest son, Charles (known as Viking) are both missing in action. She is an amazing seamstress and turns the rags into fashionable, affordable dresses and coats.

Elated and satisfied! And then petrified. Will anyone buy it? Will people like it? It’s always the same; a real roller-coaster of emotions.

None. I get too attached and when something happens to them it’s just awful

I’ve just finished Louise Beech’s That’s What Makes Us Human. It’s a beautiful book. I feel as if I need a few more days to completely absorb it before I start something new. It’s really stayed with me.

I’d go to the Taj Mahal in my own book Singles and Spice (I hope that’s allowed) to see the sunrise on it. It is truly magnificent; the whole building shimmers as if it’s covered in diamonds. It’s a sight I’ll never forget.

I would like to say a big thank you to Elaine Spires for sharing with us details of her writing life and for a wonderful interview.