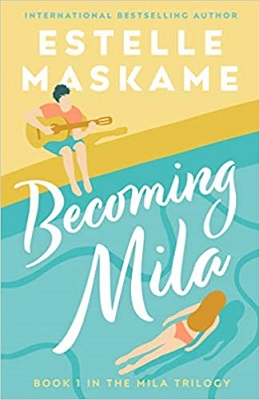 Meet Mila. Sixteen years old, an ordinary LA girl . . . except for her A-list actor dad. With his next big movie premiere on the horizon, the media spotlight is intense – and when Mila’s antics make headlines, something must be done.

Exit Mila. Dispatched to small-town Tennessee to cool off. It’s summer, she’s off-grid in the middle of nowhere, but Mila’s no sooner arrived than she falls out – in spectacular style – with local mayor’s son, Blake.

Blake knows just how to rattle Mila. He also knows just how she feels. He gets the drama, the dynamics, the tricky parents. Perhaps they have far more in common than either of them cares to admit.

Set in Los Angeles and Nashville over a long hot summer, Becoming Mila shimmers with friendship, family frictions and romance. It’s the first book in an exhilarating new trilogy from Estelle Maskame.

Becoming Mila is one of those books that has been sat on my TBR list for a while and I wish I had picked it up sooner. It is a delightful, fun, engaging YA novel featuring a young sixteen-year-old girl who has been sent to live with her aunt and grandfather in Nashville from Los Angeles. The reason, her film star father doesn’t trust her not to embarrass him before the release of his next big movie and wants her out of his way.

When Mila arrives in Nashville she learns that not only has she been sent miles away, her aunt has also been given orders not to allow her outside of the family ranch. However, her aunt believes that she needs some freedom and lets Mila leave as long as she notifies her of where she is at all times.

Mila finds it hard being the daughter of a famous movie star and so tries to remain anonymous, but things don’t go according to plan, especially where Mayor’s son Blake is concerned. He knows all too well what it is like living in the shadow of someone famous and so he is glad for a bit of the limelight to be taken away from him, not realising how much it upsets Mila.

The book flowed with ease. The pace was fast and as such, I flew through the book in just two sittings. The characterisation was perfect and I felt like I got to know the characters inside and out. Mila came across as a lot older than she is, possibly due to the fact she has had to grow up quickly being in the public eye constantly.

The one character I adored was Mila’s grandfather. He was so lovely, caring, and sweet. He was always trying to be helpful, much to the annoyance of her aunt. He was also upset that Mila’s father never visits or even calls him anymore. Like he has gotten too big to even be associated with his family.

Becoming Mila is a book I adored from beginning to end. I am so happy to see that is the first in a new trilogy and I can’t wait for the next book to be released. That one won’t sit on my TBR list for so long!

Estelle Maskame is a novelist from Peterhead in Scotland. After gaining universal acclaim online during her teenage years, she signed a print contract with the Edinburgh-based publisher Black & White Publishing at the age of seventeen. She left school and now writes full-time.