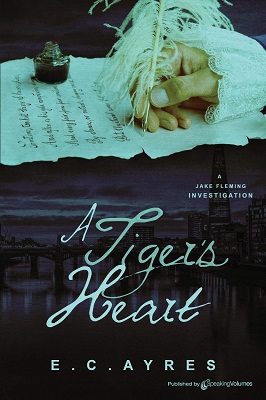 San Francisco based Investigative reporter Jake Fleming has a problem: Desmond Lewis, a Professor of English Literature and an old friend of his from London has vanished, en-route to a talk at the University of California in Berkeley about a new book promising shocking revelations. He never arrives. When a rented car is found parked on the Golden Gate Bridge with Lewis’s travel bag in the trunk, the police deem it a suicide. Jake doesn’t believe that for a minute, and convinces his newspaper, The San Francisco Tribune, to sponsor a trip to London to investigate.

When Jake arrives, he discovers Lewis’s office and apartment have both been ransacked. Any evidence of a new book is gone: no manuscripts, no flash drives, nothing. The only remaining clue is a list of brief words or abbreviations. Their meaning escapes him, but it’s all he has.

Investigative reporter Jake Fleming is in a quandary. His friend, Professor Desmond Lewis from the University of London called and arranged to meet for dinner but stood him up. Odd, because the good professor had been eager for Jake to look over a new book he was about to publish, one that promised to shake up the “Ayatollahs of Academe.” When Lewis also fails to show for a sold-out guest lecture at U.C. Berkeley and the manuscript for his book disappears, Jake knows something is amiss.

Curious and concerned, Jake catches a flight to London to find out what’s what with the missing academic. Jake’s daughter Melissa, a Berkeley graduate student and aspiring actress, soon joins him for what becomes a serious investigation when they learn authorities have found Lewis’s body in California. Father and daughter are followed, warned, and even threatened, but they stubbornly keep pressing the investigation despite more murders. With reluctant the assistance of Diana Parker, chair of the London University English Department, can they unmask the murderer?

A Tiger’s Heart is nominally a thriller, but I didn’t get much sense of that until near the end. Much of the tension seems artificial. Although the reader is initially in the dark about the “big secret” Lewis’s book was supposed to expose, the author drops enough hints so that when he does reveal it, it’s really no surprise. I also had trouble buying into the premise that Lewis’s “secret” was earth-shaking enough to drive anyone to commit multiple murders, although the writer makes a credible attempt to sell it.

A Tiger’s Heart didn’t keep me on the edge of my seat, but it’s a good story and enjoyable reading. The main characters are interesting and three-dimensional, so I was interested in their situations and problems. When Jake and Melissa make forays into London or other parts of England, the descriptions are sufficiently vivid I could easily picture them in my mind. And there are still enough elements of mystery that readers of that genre can appreciate. It’s worth a read.

Following upon the early success of his mysteries, Ayres spent much of the next decade researching a forthcoming book about Shakespeare, then accepted a position for three years living and working in China as a “Foreign Expert,” teaching English at a major state university in Harbin. His book on these adventures, Inside the New China, is now available wherever books are sold.

His award winning Tony Lowell Mystery series is now back in publication after a decade with his fifth novel of this series, the new environmental thriller Day of the Red Tide.

He lives and works in Seattle.