This week on ‘The Writing Life of:‘ I am thrilled to be interviewing author T. Ellery Hodges, who will be sharing with us detail of his writing life, telling us all about his latest book ‘The Never Hero‘, which was released on 12th September 2014 and answering a few fun questions too. Post contain affiliate links. 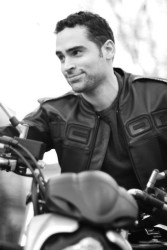 T. Ellery Hodges was born in Sacramento, Ca in 1981. He moved to Seattle at nineteen and received his Bachelors of Science from the University Of Washington.

Somewhere in high school and early college, he gravitated toward writing. Then he forced unsuspecting students, who had made the mistake of taking creative writing during the same period as him, to endure the reading of his short stories.

During his twenties he worked in a laboratory performing drug trials, travelled most of Washington State fixing computers for Apple, sold gym memberships, and helped manage an international supply chain for a chemical distributor. Yet, much like the rest of his generation, he found that he wasn’t well suited to doing any type of work for long.

So, he brushed the metaphorical dust off the novel he’d been writing in his head for the last six years. Then, he looked up the definition of ‘metaphorical’, because he was pretty sure that people who called themselves ‘writers’ knew that one. He found that there was at least one thing he could endure doing for forty hours per week for the rest of his life.

There is a lesson in all that, about ignoring what you want to do for what you think you should, but this is a biography not a lecture.

Currently, he lives with his wife and son in Seattle. He has two dogs, a Border Collie and a Doberman, Darwin and Dharma, respectively.

Hard to say. I remember as a kid, we had an old typewriter. My parents would send me off to stay with my Grandparents for a few weeks, and I would lug the thing with me, thinking I was going to write a novel while I was out of town. At that age, I soon found a single completed page wasn’t as easy as it seemed.

In high school, I realized my writing had the voice that I always wished I had when speaking. That my mind, which had proven rather useless in most scholastic endeavours up to that point, had a linear thought process that translated onto the page well.

It came to me as a sudden realization when I was 17. Some people wake up one day and notice that they have a talent for math. I had gotten placed in a class for literature and rhetoric.

I was being a lazy teenager the whole time, a self-defence mechanism for not being a very good student. Sleeping in class and what not. I thought the teacher expected me to be a failure. When I got my first essay assignment, a part of me decided I wanted to prove otherwise. I dove into it, probably blew off other homework to focus on it.

The next week, the teacher read it in front of the entire class as the best in the bunch. Suddenly, I had a title to defend, but it brought motivation out of me I hadn’t had in school before. She became one of my favorite teachers as a side note.

It’s a long story. There are things I am just terrible at: submitting cover letters/resumes, selling myself at interviews. Fifteen years ago, the entire publishing industry would have crushed me before I’d gotten started, as I would basically be interviewing for an agent or interviewing for a publisher.

Casting my work into the void hoping someone with the power to make things happen decided to take a risk on it. I knew this going into college, ended up majoring in molecular biology, thinking I was taking the smart road to job security.

Still, I worked three jobs after graduating and soon realized they all made me miserable. When I was starting to consider drastic changes, like joining the army, a friend of mine saw how unhappy I was and stopped me. He opened my eyes to what was happening in the industry. It turned me around. I started writing. Oddly, the day job stopped being so miserable as a result.

Once I had a creative outlet, and was excited about some piece of work I was doing, the rest seemed less of a burden.

There have been books that inspired me, a lot of them were actually non-fiction.

I read a ton during that time, but it was all over the place. Authors that stick out in my mind: Daniel Quinn, Susan Faludi, Dan Millman, Carl Sagan, Robert Wright, Sam Harris, Joseph Campbell.

It’s not very interesting. I sit after work and write as long as I can before I have to go to bed. On the weekends I can sometimes sit for 3-4 hours and write.

Most of it honestly takes place in my head long before I get to the keyboard. Once I sit down to write, I usually I already know where I am headed and just have to figure out the unexpected obstacles along the way.

Computer. Sometimes I take notes on post its or my phone if I have a thought while at work.

Well, there is only the one book so far. I’d have to say Collin and Hayden. They feed off one another, so it’s hard to separate them. They are the yin and yang of modern fanboys.

Most authors probably don’t agree with me, but I dislike reading a series when I can tell the author didn’t know the end game before he/she started writing.

Don’t get me wrong, it can change and evolve as you get there, but to not have the general details worked out before you start, feels like writing a story without knowing the point of it yet.

That said, I am going to try writing a ‘seat of my pants’ novel one day.

At the gates between worlds…
In a war outside of time…
He fights for us.

Reclusive college student Jonathan Tibbs wakes in a pool of blood, not a scratch on him. His life is about to undergo a massive shift. A violent and merciless otherworldly enemy unleashes slaughter in the streets, calling out in a language only he understands.

And it is seeking its challenger.

In order to defeat the threat, Jonathan must become a temporal weapon… while remaining completely anonymous. Unfortunately, harnessing off-world powers has its own special challenges…

The Never Hero is the first instalment in The Chronicles of Jonathan Tibbs — a mind-bending, genre crossing, action-adventure trilogy.

Have a read of our review of ‘The Never Hero‘

I had the idea for the story over 6 years go. I’ve had other novel ideas since then, but this was the one I always felt I needed to write. It was an idea I had never seen in fiction or film before.

Every once in a while I would see a book or a movie that had a trailer/blurb hinting at some of the same elements and I would worry that someone had beat me to it.

The first time I saw the trailer for Edge of Tomorrow I got worried. I didn’t calm down until I saw it in the theatres.

Anyhow, I tried on two separate occasions to get the story started, wrote about sixty pages on both attempts, but the voice wasn’t right. I tried again in June of 2013, and things fell into place. The book was published in September of 2014.

I have one character that consistently causes me problems: Grant. He is an antagonist, and I don’t believe in creating villains that are evil for the sake of being evil. I think it just takes a certain amount of effort to really step into a despicable person’s mind, but at the same time, find compassion for how they became who they are.

Jonathan was always going to be as average as a guy I could image. Jonathan was the most average name for a guy that came to mind. Tibbs came later. I wanted his name to be neutral, not something that would immediately lead someone to think ‘Bad Ass.’ That is why his last name isn’t Phoenix, Riggs, or Steele or some such.

It’s funny you ask that, I can cast every character in the book with ease except Leah and Jonathan:

The thing with Jonathan is that he continues to bulk up throughout the series. I think Theo James would have the look, but they would have to CG all the muscle off him at the beginning.

I’ve started seeing Leah in my mind as Kristen Connolly with red hair, as she looked in her role for The Cabin in the Woods.

Yes, friends, family, co-workers. I gave them all copies and asked them to put a post it note in at every part of the book where they got bored. Then when I did revisions I tried to take said parts out. If those parts were necessary for the story or sequel, I shorten them as much as possible.