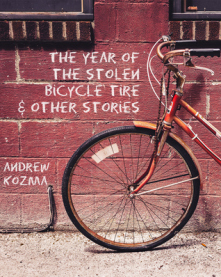 The Year of the Stolen Bicycle Tire and Other Stories is a collection of weird, beautiful literary fiction containing four stories based in the fictional college town of Martinsville, Florida, as well as Athens, Greece, and Grandfather Mountain in North Carolina.

The title story concerns a philosophy professor bent on taking revenge against a bike tire thief, who also happens to be one of his students. In “An Apartment Hunter’s Guide to Martinsville,” a young woman attempts, without luck, to find an apartment and perhaps a friend in her newly-adopted city. “Mile-High Bridge” tells of a couple climbing a mountain to give their cat a wilderness burial, and what they find along the way. Lastly, “The Gypsy” is about a couple in Athens, Greece, just after a city-wide riot, who find a woman who promises to rid them of their bad luck.

All four stories are unique and cover subjects that you don’t normally read about.

For me this book was a tale of two halves. Whilst I enjoyed two of the short stories, ‘An Apartment Hunter in Martinsville’ with its quirkiness, and ‘The Gypsy’ with its unusualness, the other two of them I couldn’t get in to, no matter how hard I tried, or how many times I read them, and to be honest, I found them quite boring.

One thing that did nark me about all four stories is that they all end without warning, as if someone had removed the last page from each story. I understand that they are short fictional works, but I would still like some kind of conclusion in my readings.

The author is a teacher of philosophy, which is clearly represented in his stories, though if I’m being honest, a little too much for my liking. I’ve never been one to over analyse anything, or to think too deeply about things, so maybe this is why I couldn’t get my teeth in to it.

If you are into philosophy, then this book will most likely sit well with you.

Andrew Kozma’s fiction has been published in Albedo One, The Cupboard, Fantasy Scroll and Daily Science Fiction. His poems have appeared in Blackbird, Subtropics, Copper Nickel, and Best American Poetry 2015, and his book of poems, City of Regret (Zone 3 Press, 2007), won the Zone 3 First Book Award.