The Thirty-Ninth Man by Dale A. Swanson – Book Review

The Thirty-Ninth Man by Dale A. Swanson – Book Review 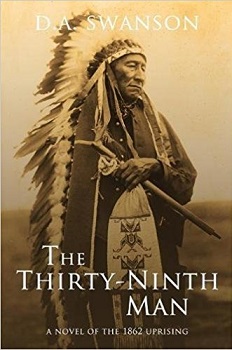 The Thirty-ninth Man is a historical novel culminating with the mass execution of thirty-eight men—the largest mass execution in the history of the United States. History tells us little of the thirty-ninth man—Tatemina-Round Wind—sentenced to die with the others. This story places fictional Anton McAllister in the center of real events, many uncovered during painstaking research.

In 1862 with the beginnings of the Sioux Wars in the Minnesota River Valley, mixed blood, Anton, balances on the razor thin line separating corrupt Indian agents, unscrupulous fur traders, the U.S. Army and powerful chiefs from the Chippewa and Dakota nations. When his best friend, Tatemina, is falsely accused of war crimes and sentenced to die, Anton begins a race to save him from the gallows.

In The Thirty-Ninth Man D.A. Swanson describes the events, lifestyles and relationships of the Native Americans, settlers and the US Government during the first part of the 19th century in what is now Minnesota. Much of the book is fact, mixed with fictional characters which helps bring the story to life.  It was easy to read, although at times I found the joins between fact and fiction a little obvious.

In addition to the political viewpoints, the author gives us plenty of action and interesting descriptions of the lives of the indigenous population, the trappers and the government representatives. They all had one thing in common; despite the abundance of wildlife in the woodlands in that area, life was very hard in what was at that time the north-western limit of the Union.

The book covers a long span of time, nearly sixty years, and features a large number of players although D.A. helps us by listing the primary characters at the front of the book, separated into fictional and non-fictional.

The copy that I read was a paperback and it included two full page maps but unfortunately they were of poor quality with one barely readable and the other illegible.   It could however be that mine was an advance copy and subsequent print-runs were clearer.

I found The Thirty-Ninth Man extremely thought provoking. D.A. Swanson is rightly very critical of many of the Government officials in the handling of the treaties with local tribes who clearly were not given the respect they deserved. He does however balance the arguments by making it clear that the Native Americans struggled with the concepts of borders and ownership.

He also shows us how their warrior culture was always going to clash with the Government’s hope that they would become passive farmers.  Thinking on it, the people of Europe, Asia and much of Africa evolved from hunter-gatherers to farmers thousands of years ago so in their view why should that not also work in America?

Interestingly the author uses the terms Indians and Redskins which were no doubt used at the time although my understanding is that Native Americans is more acceptable today.

The Thirty-Ninth Man is an action packed story that has not only entertained but has encouraged me to discover more about this challenging period in US history. I have awarded four stars.

Dale Swanson, born in Minneapolis, Minnesota, 1942, now makes his home in Prior Lake. Married since 1965, he has two children and four granddaughters.

He retired from Qwest Communications in 2008. Dale has taken writing classes at the University of Michigan and has been a member of The Loft Literary Center, Minneapolis, since 2003. His historical novel about the Minnesota Dakota War of 1862, “THE THIRTY-NINTH MAN” is now available.