The Song in You by Hester Velmans – Guest Post

The Song in You by Hester Velmans – Guest Post

Today on the blog we welcome author Hester Velmans, with her guest post ‘The Song in You‘. 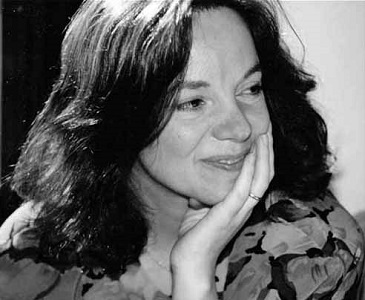 Hester Velmans is a novelist and translator of literary fiction. Born in Amsterdam, she had a nomadic childhood, moving from Holland to Paris, Geneva, London and New York. After a hectic career in international TV news, she moved to the hills of Western Massachusetts to devote herself to writing.

Hester’s first book for middle-grade readers, ‘Isabel of the Whales,’ was a national bestseller, and she wrote a follow up, ‘Jessaloup’s Song,’ at the urging of her fans. She is a recipient of the Vondel Prize for Translation and a National Endowment of the Arts Translation Fellowship.

The Song in You

Writers of prose are not always aware of the sound of their writing. You can be so involved in getting down the facts of the story, and dealing with the many other issues that require your attention – theme, character development, setting, structure, tense, narration, point of view, etc., that the cadence of the writing – what I like to call the “song” — is often overlooked or ignored.

As both a translator and writer of fiction, I am very conscious of the sound of the words on the page. You may assume that reading is a purely visual, eye-to-brain activity. But the fact is that most people are saying the words to themselves in their head as they read. Which means that rhythm and sound are too important to be taken for granted.

When I translate another author’s writing, I will very soon start to hear his or her voice in my head. The trick is to convert that very individual voice, its rhythms, patterns and song, into something equivalent in the target language (in my case English). Two random passages from two of my most recent translations can show how different voices give different effects. The first is from The Secret Diary of Hendrik Groen, 83 ¼ years old:

‘Old people make less adrenaline and dopamine, the compounds responsible for butterflies in the stomach and heart palpitations. But being in love isn’t about the quantity of hormones your body produces as much as the relative upswing in those hormones. In the elderly, that hormone surge can be just as great. Says the newspaper. Which might explain why when Eefje is near, I always find myself starting to stammer and stutter a bit.’

I like to think of Hendrik Groen as someone who is a softy at heart but doesn’t want anyone else to know it. His voice is straightforward, down-to-earth, a bit blunt, gruff and businesslike. Compare that to the more rhythmic narrative voice in the novel The Consequences by Niña Weijer, which was the next translation I tackled, and is about a young experimental artist:

‘You may wonder why Minnie deliberately stepped out onto the thin ice at around two o’clock that afternoon, and stood there as it gave way, only slightly startled when this started happening beneath her feet, this transformation of solid into liquid. Or why she wasn’t just seeing the trees but was really staring at them and was certain they were sycamores. Or why she didn’t instinctively throw out her arms as in a parody of a tightrope walker, or why in hell none of it made any sound at all.’

The Book of Genesis (the King James Bible) may be the best example of musical, hypnotic prose, in which the word “and” is repeated over and over to create a poetic cadence.  Its rhythms are masterful; they pull you into the story whether you intend to be swept away or not.  Writers like Hemingway have taken that same repetitive approach and turned it into a mesmerizing tune of their own:

In writing dialogue, too, I think that it helps to think of the song, Every individual’s speech patterns are different, and if you pay close attention to those patterns, and try to be consistent with them, the reader will have less trouble distinguishing between the different voices, and will start recognize the characters by their voice-personalities.

I sometimes find myself humming to myself as I’m writing.  There is something extremely satisfying in working on a sentence or paragraph, manipulating it, smoothing out the edges, injecting meaning and rhythm, crescendo and diminuendo, until it has the right “ring” to it. It’s an aspect of writing that isn’t often discussed, and it may be instinctive in most cases, but that doesn’t mean it is not important.

Endings, in particular, seem to demand a certain sound— a finality of rhythm and pace.  It can be the end of a paragraph, the end of a chapter, or, most memorably, the last lines of a book. Listen for it in Scott Fitzgerland’s perfect final line,

“So we beat on, boats against the current, borne back ceaselessly into the past.” (The Great Gatsby)

“They went quietly down into the roaring streets, inseparable and blessed; and as they passed along in sunshine and shade, the noisy and the eager, and the arrogant and the forward and the vain, fretted, and chafed, and made their usual uproar.” (Little Dorrit)

When it came to finding an ending for my own novel Slipper, the “song” came to me almost impromptu:

“And, wondrous to relate, at that touch the fire began to glow again, first mildly sparking in their fingertips, but spreading rapidly past the elbows into the chest, and finally, as they fell gratefully into each other’s arms, turning into the wild conflagration they both remembered, that licked their bones and seared their loins and fed upon their innards.”

And through multiple rewrites, I left it just as it was. 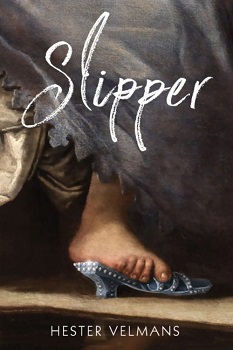 Meet the woman who will inspire the author of the world’s most famous story:

Lucinda, a penniless English orphan, is abused and exploited as a cinder-sweep by her aristocratic relatives. On receiving her sole inheritance–a pair of glass-beaded slippers–she runs away to France in pursuit of an officer on whom she has a big crush. She joins the baggage train of Louis XIV’s army, survives a horrific massacre, and eventually finds her way to Paris. There she befriends the man who will some day write the world’s best loved fairy tale, Charles Perrault.

There is much more: a witch hunt, the sorry truth about daydreams, and some truly astonishing revelations, such as the historical facts behind the story of the Emperor’s new clothes, and a perfectly reasonable explanation for the compulsion some young women have to kiss frogs.

This is not the fairy tale you remember.

You can find out more about Hester Velmans by visiting the website/social media sites below.