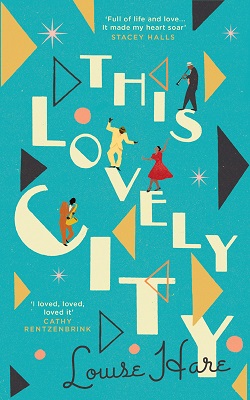 The drinks are flowing.
The music is playing.
But the party can’t last.

With the Blitz over and London reeling from war, jazz musician Lawrie Matthews has answered England’s call for help. Fresh off the Empire Windrush, he’s taken a tiny room in south London lodgings, and has fallen in love with the girl next door.

Touring Soho’s music halls by night, pacing the streets as a postman by day, Lawrie has poured his heart into his new home – and it’s alive with possibility. Until, one morning, he makes a terrible discovery.

As the local community rallies, fingers of blame are pointed at those who had recently been welcomed with open arms. And, before long, the newest arrivals become the prime suspects in a tragedy which threatens to tear the city apart.

In 1948 to help with postwar Britain due to lots of buildings being destroyed and jobs needing filling, the UK advertised for people in the Caribbean to come to live here. The Empire Windrush arrived on the 22nd June 1948 carrying mainly young men.

Lawrie Matthews was one of these men hoping for a new start in the UK, the land he had heard so much about. However, the people of the UK weren’t quite so welcoming as they had all been lead to believe. This was a nation of people that didn’t welcome change, especially if that change came with a brown body. Racism was rife.

Having gotten himself a job as a jazz musician of a night-time, a postal worker during the day and a young lady, Evie, he was smitten with, Lawrie had hoped that people had come to accept him. Then he happened to be in the wrong place at the wrong time as a woman noticed something in the pond of the local park and asked Lawrie for help.

What Lawrie pulled out of the pond would haunt him forever and also make him the prime suspect for murder. A baby wrapped in an embroidered blanket no older than 9/10 months was dead. She was also a child of colour and the fingers of the local people and the police began to point.

This Lovely City is a very poignant fictionalised novel about the arrival of the people from the Caribbean on the Empire Windrush focusing mainly on just one immigrant, Lawrie. These were people who left their beautiful Caribbean islands behind to come to the UK to help build Britain back up after the second world war and to fill jobs that had become vacant through casualties of the war. We invited these people here and then treated them like they were worth nothing.

The book did have me feeling enraged at what Lawrie was having to go through all because of the colour of his skin. He helped a woman out who noticed something in the water and whilst she was sent on her way being cleared of any wrongdoing Lawrie was taken to the police station and questioned and made to feel like he was guilty of a crime he hadn’t committed just because of the colour of his skin.

The book moves back and forth between 1948 and the boat’s first arrival in the UK and then 1950 where the main section plays out. There are letters and newspaper articles within the pages too.

There are some amazing characters, not only Lawrie and Evie but characters such as Derek who is a bit of a rascal, Mrs. Ryan who was Lawrie’s landlady and Arthur with his wise words.

I absolutely adored this book. It is beautifully written, embraces 1950’s Britain vividly, both it’s good and bad sides and was very touching. It is one of those books where you think that you will read just one more chapter and then an hour passes by and you still haven’t put it down. I can see Ms. Hare being an author to watch out for in the future if this debut novel is anything to go by as she can certainly write with passion.

Louise Hare is a London-based writer and has an MA in Creative Writing from Birkbeck, University of London. Originally from Warrington, the capital is the inspiration for much of her work, including This Lovely City, which began life after a trip into the deep level shelter below Clapham Common.